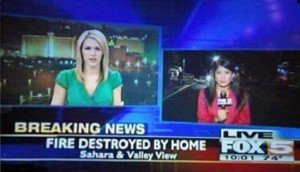 Unless you’re an Internetless Luddite or 80 years old, you probably don’t feel the need to watch newscasts. After all, you already know the drill — if it bleeds it leads, then there’s an update on Lindsay Lohan and Charlie Sheen, then there’s a story about a cute dog beating the odds, and then there’s a weather forecast with a 98 percent margin of error.

So there’s really no reason to watch … except when there’s a hilarious mistake. Verbal gaffes, messed-up graphics, and unexpected faintings make newscasts fun to watch. Which is why we love these awesome newscast screw-ups.

“President Obama Is Dead!”
There are verbal slip-ups, and then there’s this guy mistaking the most wanted man in the world for the president of the United States.