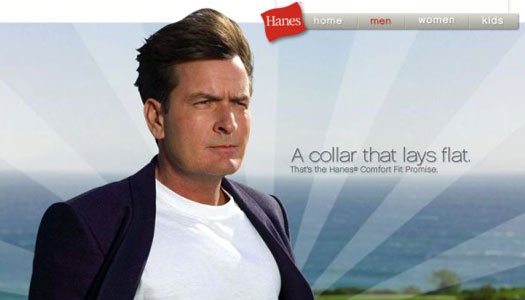 #4. Charlie Sheen And Underwear
At the age of 15, Charlie Sheen used his old man’s credit card to buy an escort in Vegas so he could lose his virginity. Sheen then proceeded to do Belushian amounts of drugs, bang all manner of strippers and prostitutes, and allegedly rough up women.

But Hanes figured all of that was behind him in 2008! So Sheen started to promote their underwear. The company averted its eyes last October when Sheen got drunk, lost his clothes (Hanes and all), and generally caused a ruckus at the Plaza Hotel with a hooker. Hanes stuck by their man because, hey, we all slip up! But then Charlie lost it again two months later when he was arrested on charges of domestic violence. That was enough for Hanes, and they pantsed his ads.