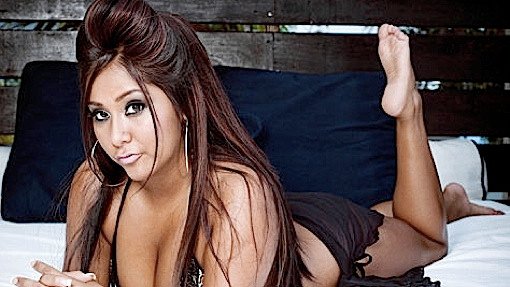 Snooki is pregnant — probably. Shy and demure as ever, Ms. Polizzi is not confirming the rumors (she’s supposedly brokering a deal with Us Weekly), though she is holding various gigantic purses in front of her stomach. If she is indeed carrying the first human conceived via smoosh, the kid will have a lot to overcome … or live up to, depending on your viewpoint and proximity to Seaside Heights. Regardless, we have some thoughts on how things might go for the Snooki’s spawn …

October 31, 2012 — Snooki gives birth five weeks late (she credits all the Kegels) to Mojito Anthony Polizzi while she’s in the back of a Hummer limo on her way to an Atlantic City Halloween party. As a result, Snooki stays at the party for only a few hours.

2018 — Producers of Jersey Shore (which is now being broadcast on HDTV) spin off a series called Young Jersey Shore that features the offspring of the original cast. Mojito is the break-out star, but his brand of virgin cocktails for children called Mojito’s No-jitos sells very poorly.

2021 — Just before Young Jersey Shore‘s much-anticipated fourth season, Mojito tweets “tell my fans 2 pray 4 me,” then enters rehab for his addiction to Juicy Juice and Tastykakes. He is in and out of rehab for more than a year.

2022 — Snooki is burned alive during a tragic accident involving a faulty tanning bed and a can of hair spray. Mojito immediately leaves rehab for good.

2034 — History is made when Mojito becomes the first person named after a cocktail to be offered a Rhodes Scholarship. Three days after he arrives in Oxford, however, he is arrested for smooshing in public.

2039 — Even though he has a PhD in physics, Mojito can’t help but answer the siren call from Hollywood, where he lands a starring role as himself in the Lifetime movie ABC, DTF: Growing Up Polizzi.

2041 — Realizing his acting career is going nowhere, Mojito lands a job at NASA and is soon chosen to man the first flight to Mars when doctors discover that his skin has an inhumanly high tolerance to solar radiation.

2044 — Halfway to Mars, contact with Mojito and the ship is lost. The worst is feared.

2045 — Incredibly, NASA receives a transmission showing Mojito on the surface of the Red Planet, pumping his fist next to a homemade flag reading “Space Jersey.”