The classic 1990s film Point Break recently scored a remake starring Luke Bracey, Ray Winstone, and Édgar Ramírez. However, before you get too invested in this new film, you should take the time to study up on the original Point Break. Released in 1991, the original has plenty of fascinating material.

Back in the ’90s, Time’s critic Richard Corless summed the movie up in three words, “pretty but dumb.” And he’s right, but it’s also crazy watchable considering the film has a painfully weak plot: An FBI agent is assigned to infiltrate a gang of banking-robbing, ex-president mask-wearing surfers who rob banks. Oh, and the dialogue is terrible, too. As for the acting, well, Keanu Reeves and Gary Busey are the stars. However, the visuals are great, thanks to Kathryn Bigelow’s amazing direction.

Point Break would not fit solidly into the cult category of so bad it’s good without Bigelow’s help. Her action scenes reflect her painter’s eye for color and composition. They are shot from multiple angles and are flawlessly edited. Though danger is a mainstay, even a motivation, for the surfing anti-heroes, the surfing and skydiving scenes emphasize the sublime nature of pushing yourself beyond constricting expectations. The movie has been accused of being overly machismo and certainly flunks the Bechdel Test. This perspective, however, perpetuates the false dichotomy of male and female energy. The original Point Break is an adrenaline rush for fans of all genders.

Not a top grossing film, Point Break still did fairly well at the box office, more than tripling its $24 million dollar budget. Audiences drawn in by the star power of Keanu Reeves as FBI agent Johnny Utah and Patrick Swayze as the Buddhist phrase-saying Bodhi, were captivated by the movie’s nonstop action and gorgeous cinematography. The action sequences are faultless with Swayze doing many of his own stunts. Both Reeves and Swayze learned to surf for the movie, but Bigelow had the good sense to pair them with professional surfers Bojesse Christopher (Grommet) and John Philbin (Nathaniel).

Anyway, now that you have some background, here are facts about the original Point Break … 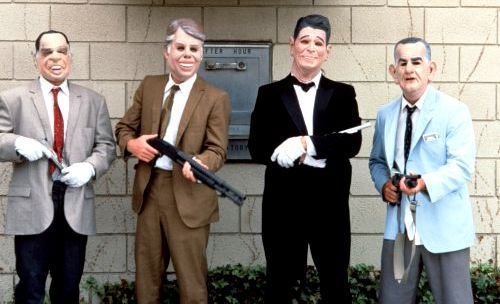 The Ex-Presidents Gang omits Gerald Ford from the lineup. Why? Because they loathed the 38th president of the United States! Kidding. Nobody knows why. Maybe the mask wasn’t as appealing as  Regan or Nixon. Still, fascinating Ford from the lineup allowed the gang to be balanced — two Republicans  (Richard Nixon, Ronald Regan) and two Democrats (Lyndon B. Johnson, Jimmy Carter). 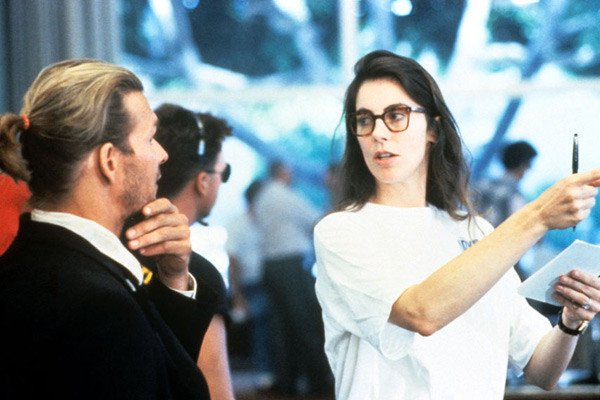 #2. The Director Won An Oscar — For A Different Movie

Kathryn Bigelow, the director of Point Break, went on to become the first female to win an Academy Award for Best Director for her 2008 film The Hurt Locker. Interestingly, the two films are linked with the premise of guys indulging in incredibly risky activities for a thrill. Her next movie, Hurt Break, will allegedly focus on a long-haired couch surfer who watches movies about guys indulging in risky activities. Sounds riveting.

#3. Keanu Reeves Was No Joe Montana

Reeves, as former QB sensation Johnny Utah, lacked the ability to throw a football convincingly enough for audiences to believe his character was a former football star. (Although we’re not sure what he did for 2000’s The Replacements, when he again played a quarterback.) To compensate, a former UCLA head coach Rick Neuheisel pitched in and a double was hired for any shots that involved Reeves tossing the pigskin. 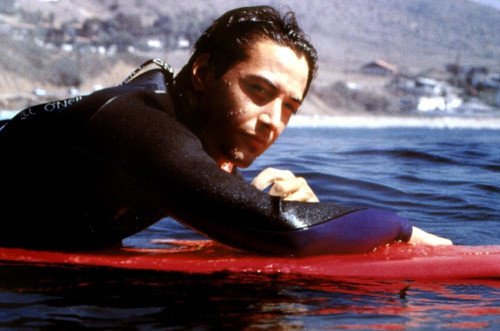 He didn’t try out fo the NFL — the dude couldn’t even throw for crying out loud — but surfing had an influence on Reeves. The film gave him a reason to learn to surf, and he continues to do so today. In fact, he’s probably surfing right this second. Oh man, he just wiped out. 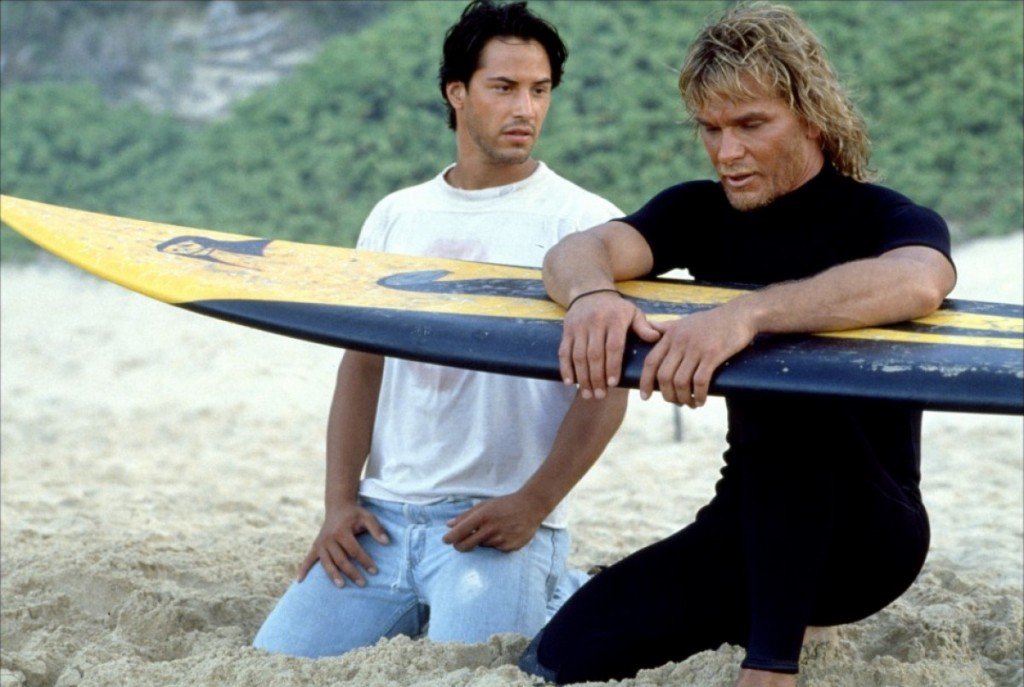 And that would have been a pretty shitty title — and we weren’t the only ones who thought so. It was eventually scrapped and replaced with an something even worse: Riders on the Storm, which we envision as either a Western or a soundtrack that would heavily feature The Doors as some shoehorned tie-in. Of course, the movie ended up as Point Break, which was selected because of its roots in surfer lingo.

The iconic chase scene where Utah could have (but doesn’t) take down Bodhi (Patrick Swayze) isn’t Swayze. At the time, Swayze was busy promoting Ghost, which meant the guy behind the mask is a double. We can’t tell you why exactly, but when we learned that it was kind of a bummer, dude. 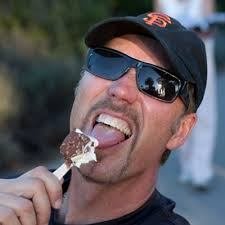 #7. The Writer Was A Waiter

The script for Point Break was written by W. Peter Iliff, who put it together between shifts as a waiter. His compensation: $6,000. We hope he didn’t spend it all in one place. 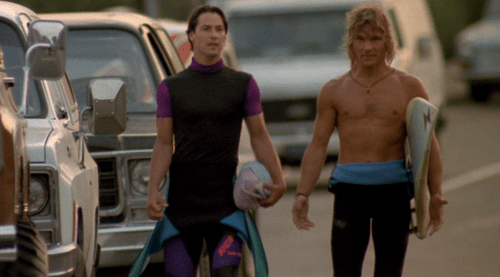 Unsurprisingly, Point Break never took home an Academy Award. However, Swayze and Reeves earned nominations for “Most Desirable Male” from MTV. Reeves won, but in hindsight, humanity lost that such a dumb award exists.

#9. The Director Was A Daredevil

Bigelow strapped a parachute to herself to film Patrick Swayze’s big jump. She also sat on a surfboard to direct the actors during the surfing scenes. 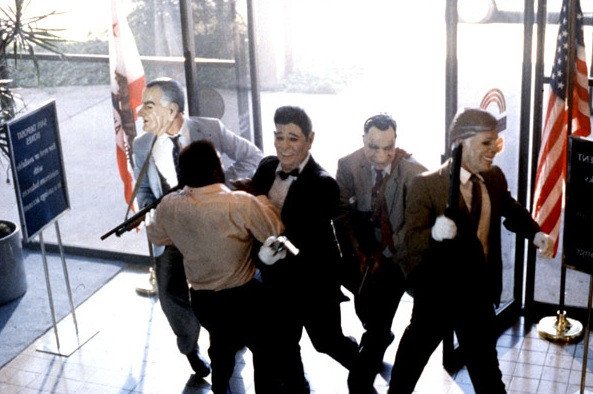 The plot for Point Break came to the co-producer Rick King after reading an article about Los Angeles suffering from the largest number of bank robberies. (This was well before L.A. would suffer from the worst most Earth-scorching draught that it’s currently mired in.) King reflected on this during a surfing lesson, and he decided to blend the two ideas together for an action film. Thankfully he wasn’t using the toilet while pondering ideas for movies …

We’ve seen it about 600 million times. And these are the things we’ve learned.