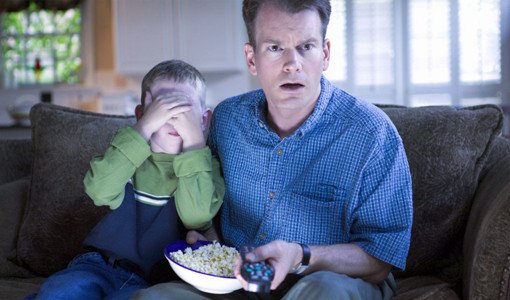 Considering that children don’t routinely create, produce, market, and franchise their own entertainment and have to rely on adults to do it for them, the gray area of what constitutes “kid appropriate” can sometimes darken into an abyss of the eternally screwed-up if you’re not careful. Sometimes those kids movies are amazing… for adults. But choose the wrong flick and rest assured your kid will bring up unwanted questions, inspire unwelcome nightmares, or simply ruin family movie night forever.

RETURN TO OZ (1985)
The Wizard of Oz is, of course, one of the all-time family movie champions, which makes this cracked funhouse mirror/Bizarro sequel all the more disturbing. First of all, they’ve gone and substituted Fairuza Balk for Judy Garland, which is like trying to replace Mr. Rogers with Heath Ledger’s Joker. Secondly, the story begins with Auntie Em taking a terminally depressed Dorothy in for shock therapy treatments. This is somehow seen as not worse than being torn apart by flying monkeys. Show this to your kids as a cautionary tale only: “See? Going away to a fantasyland isn’t all fun and games when reality comes knocking, is it? Now go to bed … or else.”

RISE OF THE GUARDIANS (2012)
Unless for some inexplicable reason you want to ruin every holiday in one fell swoop, best to keep away from Guardians. Christmas carol lyrics like “Jack Frost nipping at your nose” take on a weird flavor when your kid thinks Jack looks like Zac Efron. And let’s not even discuss the “reimagining” of Santa Claus as some kind of Russian mob kingpin with forearm prison tats — “That’s right, son. If you’re good, Vory Claus will bring you lots of presents. If you’re bad, the bratva will make sure to mail your head to your mother and me sometime between now and New Year’s as a warning to your sister.”