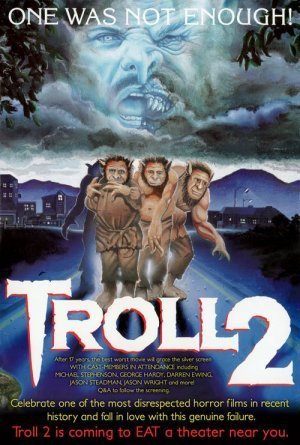 Sitting through Troll 2 , the low-budget horror masterpiece released in 1990, isn’t something someone easily forgets. The cheesy acting, pitiful script, and overall terribleness of it make it both a gloriously bad watch and sheer (accidental) genius.

Of course, it was panned by critics upon its release — and rightfully so. But as years passed, Troll 2 began to find sympathizers. From Troll 2 viewing parties to screenings in theaters — many of which are sold out — the film has had a resurgence. To pay homage, we’ve got bombed on brown liquor drinks and watched it a few dozen times before putting together this list of Troll 2 facts.

#1: The actors who were cast in the lead roles were actually walk-ons who were auditioning as extras. The only one to audition was Don Packard, who was cast as the general store owner. Packard auditioned for the part while he was on leave from a mental institution.