Owning a portable beer pong table gives you an easy ice-breaker at tailgates, concerts, the beach, and boring funerals. And when you get sick of playing beer pong (or you just plain get sick from gassing beers), the table can also be used for flip cup, cards, or strewing out passed out friends for embarrassing Instagram photos. We found five affordable and cool portable beer pong tables. Oh, and when we say affordable we mean it’s within the range you’d pay for headphones and not some astronomical amount like this $500 custom beer pong table on Etsy. 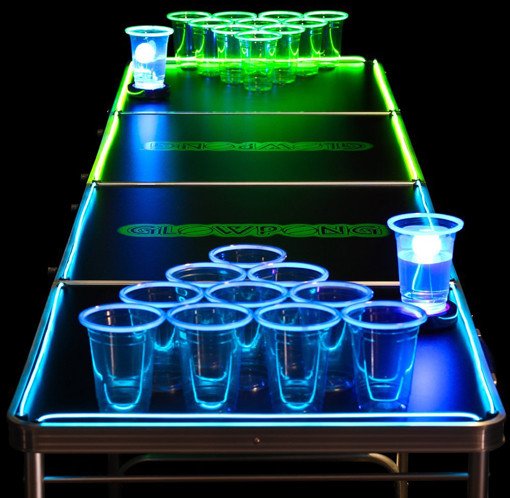 The lightweight aluminum board is regulation — 8′ x 2′ x 27 3″ — and folds up to suitcase size nice and easily. Oh yeah, the goddamn things glows. All you need to power this regulation beer pong board (4) up is two AA batteries. So if you’re on the beach playing soccer and roasting dogs and marshmallows, you can sneak a few games in before the Cobra Kai gang come ruin the fun … 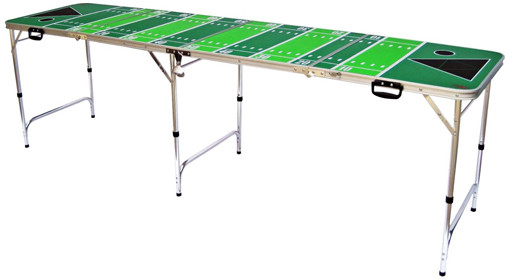 Eight feet of gridiron space unfolds in less than a minute. It comes with a scratch-resistant surface so your idiot buddy who can’t hold his beer won’t ruin the graphics when he inevitably drops his keys or a beer bottle onto the table. Of course, unveiling this at tailgates and you’re bound to attract attention. Unfortunately, many of that attention will come from guys. Politely tell them to scram and then invite the women a few cars down to take part in a game. Then set the mode to destroy and dominate the game. Unfolded the specs for the table are 96 x 24 x 30 inches. 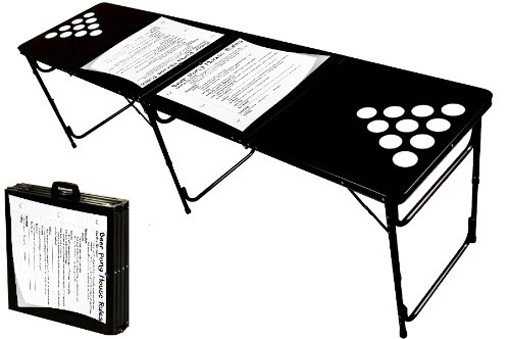 Can you bounce? Are chicks allowed to blow (ping pong balls out of cups)? What are the rules for rebuttals? Answers to these questions can make or break your game. Unless you’re playing against an illiterate asshole, the answers will be staring him (or her) in the face. Another bonus: There are cup holders that keep cups from shimmying across the table when the surface gets wet. 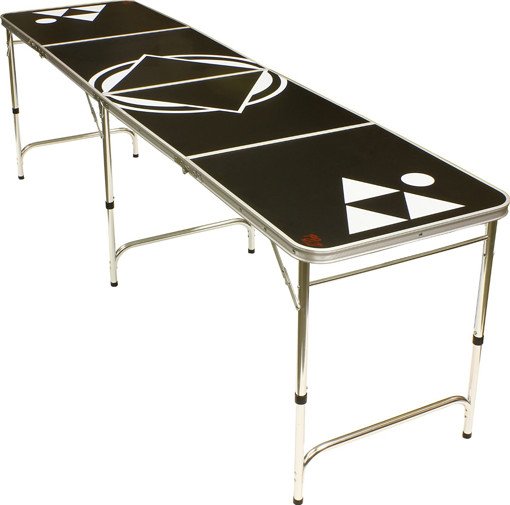 The table dimensions are 8′ x 2′ and it folds up into an easy-to-lug 2′ x 2′ surface with carrying handles. All told, it weighs 24 pounds. Wow, there were a lot of numbers in those last two sentences …

Anyway, it’s pretty basic looking — and there’s nothing wrong with that because it has a sleek look to it. Meaning, it’ll be like you’re playing the classy version of beer point if such a thing exists.

There is also a six-foot table available from the seller. If you have space, go with the eight-foot table. The six-footer will seem super small. But if you can’t fit it in your apartment or game room, the smaller table won’t totally ruin your ability to get sloshed. 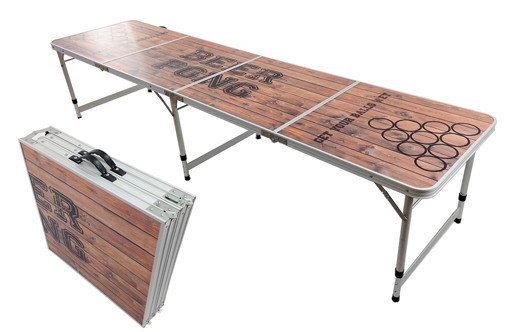 It’s more stylish than a signature black tabletop but has “Beer Pong” and “Get Your Balls Wet” written in the center in bold lettering. That’s a turnoff, but the lightweight aluminum frame is sturdy. Plus, the unique look overshadows the dumb lettering. Bouncing is easy on the table’s surface — a huge plus for those of us who utilize this sneaky technique — and when the last cup has been chugged the table folds up into a neat square with handles. Also, the table’s height is adjustable.