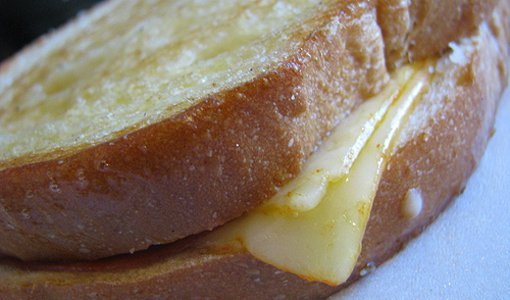 Instead of utilizing cooking spray or canola oil, use butter on the pan. We’re talking actual butter, not not-butter that you can’t believe is not-butter. Use one to one-and-a-half tablespoons per sandwich.

Use a non-stick pan and keep the burner on a medium heat — you don’t want to incinerate the bread before you get the cheese melted (more on how to expedite that process later).

Processed cheese is loaded with preservatives and salt. Plus, deli cheeses just tastes better. As for which type to use, American cheese is the standard, but cheddar, provolone, Colby, Swiss, or Monterey Jack are all good options. If you feel like getting crazy, mix and match.

GRATE OR SHRED YOUR CHEESE

Perhaps you’ve experienced the heartbreak of burning the bread on a grilled cheese before the cheese has melted. Well, if you grate or shred the cheese, it’ll melt faster, and you won’t have to throw an incinerated sandwich in the garbage.

Traditional white bread is bland and has almost no nutritional value. Instead, buy a load of fresh Italian or French bread; pick something that has a flaky crust that gives when you squeeze it lightly. (Rye and sourdough are two other good choices.)

EXPERIMENT WITH CONDIMENTS, SAUCES, AND ADD-ONS

Condiments with high acidity can balance out the cheese’s creaminess and add some kick, like hot sauce, mustard, or Sriracha. Popular combos to layer on top of the cheese include pickles; tomatoes and bacon; and a fried egg and bacon.