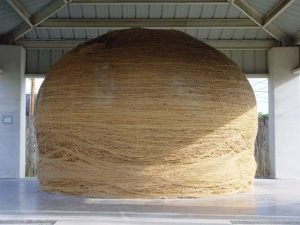 World’s Largest Sisal Twine Ball | Cawker City, Kansas
Francis R. Johnson routinely spent four hours per day for 29 years rolling a giant ball of twine in Darwin, Minnesota so he could brag about creating the world’s largest twine ball. Sucks for him, because the good people in Cawker City, Kansas have shattered that dream. Yearning to have a bigger ball than any Darwinite, Frank Stoeber started a twine ball in 1953 that has morphed into a massive beast that weighs nearly 9 tons and that, if rolled out, would span more than 1,444 miles.