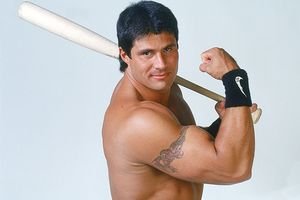 #6. Jose Canseco And Eggs
In 1989, Oakland A’s slugger Jose Canseco became the California Egg Commission’s television spokesman. He was a natural choice since his He-Man physique was clearly a result of a high-protein diet and nothing more. In a TV commercial, Canseco said, “Eggs are a terrific source of protein, and protein means power. You know what I do with my power.” He was referring to smashing home runs, but it was a different kind of firepower that got him into trouble. After an arrest in San Francisco for illegal possession of a handgun, Jose got benched.