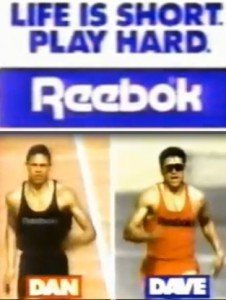 #8. Dan O’Brien, Dave Johnson, And Reebok
During the lead-up to the 1992 Summer Olympics in Barcelona, Reebok spent more than $25 million on an eight-month ad campaign that posed the question, “Who will be the world’s greatest athlete — Dan or Dave?” The dudes in question were American decathletes Dan O’Brien and Dave Johnson, both of whom were overwhelming favorites to win gold. Unfortunately for Reebok and the good ol’ U.S. of A., O’Brien didn’t even qualify for the U.S. team after a monumental screw-up at the trials. (He won Olympic gold four years later, though.) Johnson made the team, but came home with the bronze.