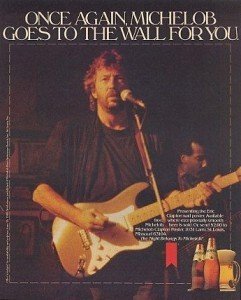 #2. Eric Clapton and Beer
In 1988 Anheuser-Busch used legendary guitarist Eric Clapton’s cover of “After Midnight” to promote the cool, refreshing taste of Michelob beer. The feel-good tune’s second line, “after midnight we’re gonna chug-a-lug and shout” seemed perfect for selling inexpensive beer. That is until Clapton admitted in an interview with Rolling Stone that he was battling alcoholism when he shot the ad, and was seeking treatment at a detox facility when it came out. For some reason, that didn’t strike the right note with the Anheuser-Bush peeps, and it didn’t take long for the brewery bigwigs to give a last call to Clapton’s endorsement deal.