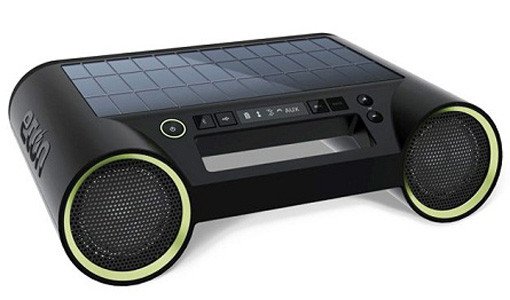 When you’re outside, listening to music without wearing headphones often presents a problem. But whether you’re camping with friends, hanging out at the beach, or guzzling beers in your parents’ garage, Eton’s Rukus Solar boombox ($180) can solve that problem. It plays music via Bluetooth or an aux jack from any audio device, and it’s totally portable thanks to an integrated handle and a weight of less than 5 lbs. The coolest part? The Ruckus can provide the soundtrack to your outdoor party via dual 2.25-inch speakers using nothing more than the power of the sun.

It takes about six hours of direct sunlight to fully charge the Rukus (it also comes with an AC adaptor, so you can charge it the conventional way), but when it’s being used in the sun, unlike you, it’ll last indefinitely. Its E Ink display — the same technology used by the Amazon Kindle to make it easy to read in direct sunlight — tells you what song is being played over Bluetooth and the Rukus’s remaining battery life.