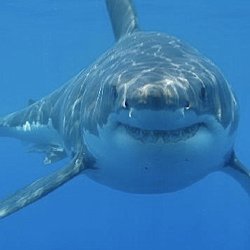 SHARKS
Sharks are less likely to attack a group of divers than a solitary diver, so it’s best to buddy up when you’re going into shark-infested waters. (Or the tub, depending on how cautious you wish to be.) If, however, you insist on collecting sand dollars all by your lonesome and run into a shark that looks hungry, swim smoothly away (no jerky movements), keeping your eyes on the shark at all times. If the shark gets too close for comfort — like, for instance, when it tries to bite you — punch or stab at itss hyper-sensitive snout, claw at its gills and eyes, and generally make it understand that eating you isn’t worth the effort. With luck, it’ll merely leave you you with a bitchin’ scar that’s just south of gross. 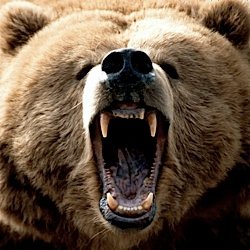 BEARS
Despite their size, some bears can reach a top speed of 35 mph, so you’re not outrunning the thing. Try to stand tall and make a show of strength, but don’t stare the bear down because it might interpret this as a challenge. Avert your eyes and try to back away upwind of the animal so it knows you’re human and probably full of half-digested energy bars, which is gross. If the bear is determined to attack, curl into a ball and try to protect all your soft, vulnerable spots. That’s about all we can responsibly urge you to do since no matter how much time you’ve spent in the gym this winter getting ready for beach season, you’re no match for a g.d. bear. 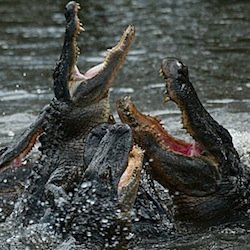 ALLIGATORS
Florida? Why the hell are you in Florida?! You deserve to be eaten by an alligator, but we’ll tell you what to do anyway. For starters, we hope you’re not in the water, because if you’re on land, you can just run away; gators are lazy and probably won’t chase you. If you’re unlucky enough to be in the water, smash the croc’s sensitive snout until its jaw relaxes. And if it has you by the arm or leg, don’t try to yank it out of its jaws; you’ll just shred your flesh even worse.)