Public shaming has become a popular way to punish people for their misdeeds, whether they’re crooks, cheats, or shitty boyfriends. (Murderers are still generally punished the old-fashioned way.) Not that public shaming is a new form of punishment; anyone who’s ever read a history book, played Assassin’s Creed, or been dragged kicking and screaming to Colonial Williamsburg knows that stocks used to be a popular way to punish wrongdoers. Sadly, throwing rotten fruits and vegetables at people locked in stocks is no longer considered humane, but with the help of social media, today’s brand of public shaming can still wind up being awfully painful.

We don’t agree with the way some parents publicly shame their kids when the kids do dumb shit because 1) they’re kids and 2) their parents are lousy, but we are fans of publicly shaming adults who deserve it. And these are some of our favorite recent examples of public shaming of everyone from husbands to neighbors to judges. 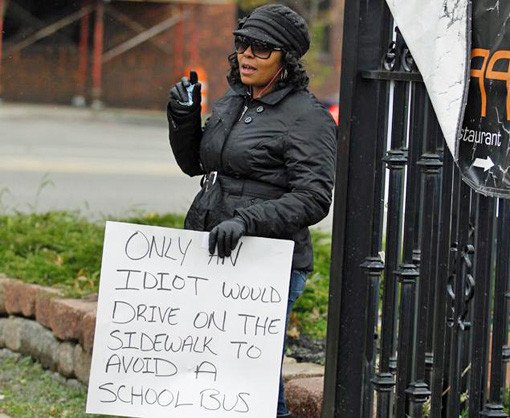 Who: Shena Hardin
Why: She passed a stopped school bus … on the sidewalk
Last November, 32-year-old Shena Hardin was cited for going all Mario Kart on a Cleveland street when she drove on a sidewalk to get around a halted school bus. In addition to a 30-day license suspension and $250 in court fees, Hardin was also ordered to stand at an intersection for an hour two days in a row, holding a sign that read, “Only an idiot would drive on the sidewalk to avoid a school bus.” Evidently, the judge didn’t even specify that Hardin’s sign had to maintain a minimum level of craftsmanship, proving just how broken our judicial system really is.