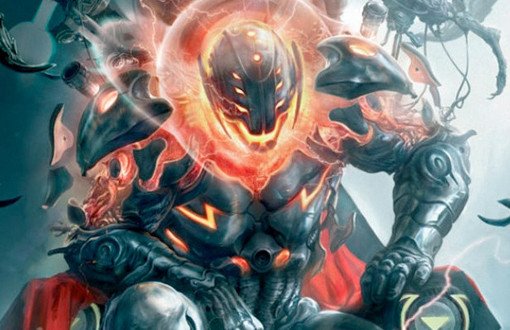 If you noticed the geeks at work hitting their inhalers particularly hard today, it’s because Marvel Studios just announced that James Spader will play the villain Ultron in the next Avengers movie, which has the bizarre title The Avengers: Age of Ultron. Spader is best known for playing weirdos and weasels in shows like The Office and Boston Legal, and movies like Secretary, Pretty in Pink. Maybe that’s why people don’t seem to be freaking out about Spader as Ultron like they were — and still are — about Ben Affleck playing Batman. Or maybe it’s just because no one knows who the hell Ultron is.

Ultron is the creation of Dr. Henry Pym, a.k.a. Ant-Man. (Yes, that’s a real superhero character. Get over it, n00b!) Ultron possesses profound smarts, a deep-seeded hatred for mankind, and something of an Oedipus complex, since he hates Ant-Man and digs Ant-Man’s foxy girlfriend, the Wasp. Ultron also has superhuman strength, speed, stamina, durability, and reflexes. Oh, he can fly, too. Wait, one more thing —  he can blast people with energy from an optical sensor, control minds, and put people in a coma with a build-in encephalo-ray. Oops, we forgot something: Thanks to an outer layer of adamantium (the same stuff that Wolverine’s claws and skeleton are coated in), Ultron is virtually indestructible.

Anyway, Ultron will be played by James Spader. And we assume Hulk, Cap, Iron Man, and the rest of the crew — God, we hope Hawkeye isn’t in the next movie — will come up with a plan that saves us all from complete and utter destruction and makes for a better movie than the relatively boring first installment. Yeah, that’s right, we said it!