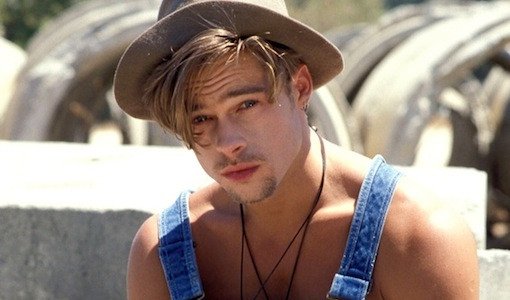 Thank God — Brad Pitt is back in the news! Only this time, it has nothing to do with needing to do reshoots for his upcoming zombie flick World War Z. Instead, Pitt told Esquire in their June/July issue that he has few friends, that he believes he suffers from face blindness, and that he did a ton of drugs while he was married to Jennifer Aniston.

But those aren’t our favorite revelations from Pitt — who, truth be told, we like a lot. Sure, the names Brad Pitt and Jennifer Aniston in the same sentence always make for good gossip (and are apparently good for something called “SEO” that people have told us about, though those people were not Brad Pitt, Jennifer Aniston, or Angelina Jolie cat fight marriage divorce naked), but we think there were far more interesting tidbits in his interview. Such as:

• He thinks his best side is what’s on the inside … along with his entire outside. “I mean,” Pitt said, “come on.”

• Once dressed up as the Queen of England and visited a sick child whose dream it was to meet her. The ruse did not work.

• His toenails are pretty gross.

• He has never even heard of Arrested Development.

• While preparing for his role in Interview With the Vampire, he regularly drank human blood.

• Kirk Cameron is every bit as irritating in person as you’d think.

• Owns the world’s only hover board.

• He has absolutely no recollection of making this ad: