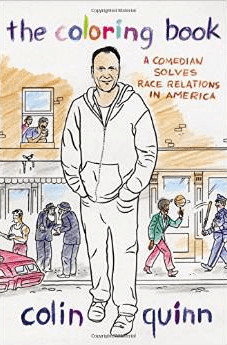 The Coloring Book: A Comedian Solves Race Relations in America ($10 and up @ Amazon.com)

Don’t be fooled: The Coloring Book doesn’t actually allow you to bust out your Crayola set and scribble on its page. (They have adult-coloring books for people interested in that). It’s a mesh between Quinn’s take on ethnicity and race and a memoir. Instead of dancing around the topic, Quinn dives right in using humor to get his point across. And what is his point? Simply to get a discussion going … and to fulfill an obligation to his book publisher.

Also: How To F*ck A Woman Is Worth A Read

And whether Quinn sells one or one million copies doesn’t really matter. A guy named Jerry Seinfeld (ever heard of him?) has already offered to adapt the book into a screenplay. It’ll be the second time the two have teamed up, the first being on Quinn’s one-man stage show Colin Quinn: Long Story Short.