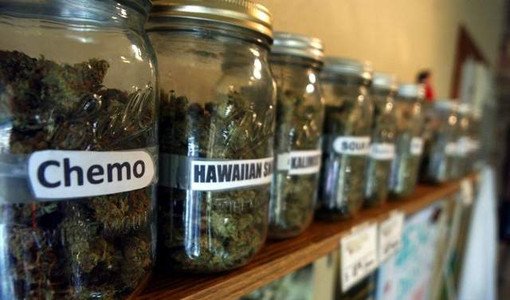 In 1969 when people with flowers in their hair were lighting doobies at Yasgur’s Farm, the marijuana they smoked wasn’t as potent or refined as the chronic Snoop Lion rips on stage during Gin and Juice. While the hippies were no doubt happy with the schwag they had, today all they’d have to do is patron a medical marijuana dispensary or McDonald’s drive-thru window for access to thousands of different strains of top-grade pot.

Some strains have goofy names like Jack Flash, AK-47, or Magic Meriln; others are rumored to leave you seeing purple goats dance the jitterbug after just one toke. To us, that marketing element gets a little gimmicky, and caused us to question whether it’s all a scheme to market the same product under different names. To get to the bottom of this greatly important matter, we spoke with Dutch Joe from Dutch Passion Seed Company in Amsterdam, and Jorge Cerventas, horticulturists and author of more than 25 books on growing marijuana.

EACH CANNABIS STRAIN IS UNIQUE
Environmental factors such as where and how the weed was grown, what strains it was crossed with, and how much THC (tetrahydrocannabinol — the principal psychoactive ingredient in cannabis) or CBD (cannabidiol — the second major cannabinoid in pot after THC) the bud contains will all help determinate how ripped it’ll get you. Basically, each strain really is unique. “Each family on earth has it’s own genetic background and unique characteristics,” Dutch Joe says. “Cannabis is no different; think of each individual strain as one individual person.”

TASTE AND SMELL VARY BY STRAIN
Sure, marijuana has that distinct weed smell, but it’s the plant’s terpenoids — building blocks for aromas, vitamins, steroids, resins, oils, and cannabinoids — that essentially what’s responsible for just how smelly or tasty a strain gets. Cannabis has been known to contain more than 200 different types of terpenoids, and the combinations that can be made with them are infinite. “The common flavors and aromas of cannabis are pine, mint, sweet, spicy, and a musky, almost earthy taste,” Cervantes says.

SMOKE SATIVA DURING THE DAY, INDICA AT NIGHT
Would you rather get high or stoned? Yes, there’s a difference. Sativa-dominant cannabis will get you high and even deliver energy. “Everything seems more intense and clear,” Cerventes explains. Whereas indica-dominant buds will slow things down, and might be better suited for treating anxiety, pain, and sleep disorders. “Indicas produce more of a bodily sensation and general calmness,” he adds.

NAMES CAN BE MEANINGLESS
Some strain names can identify things like the bud’s origin, taste, or scent. The strain Blue Cheese, for example, is a Blueberry mixed with Big Buddha Cheese; and NYC Diesel was obviously created in Boston. Kidding, but you get the idea. “We’re always trying to develop new varieties by crossing, selecting, and searching for genetics which are not available commercially yet,” Dutch Joe says.

Other times, names are just names; but like any product, a memorable or catchy handle can help it stand apart from the crowd. “There was one grower who worked at The Home Depot, and she didn’t want to go to work one day, so she called in a bomb threat,” Cerventes recalls. “When she went back to work, everybody called her “Bomb Threat,” and from there she named her strain Bomb Threat Bubba.”