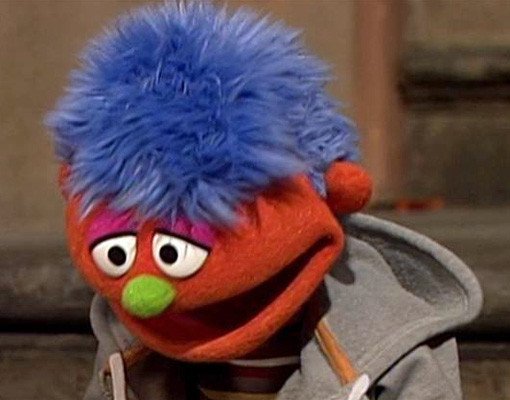 The United States has the highest incarceration rate in the world. Why? BECAUSE WE’RE NO. 1! (Also, because we have preposterous drug laws and a prison industrial complex that contributes millions of dollars to politicians to ensure there’s a constant need for more prisons.) That, um, honor also means that while Mommy and Daddy are perfecting their shank-making techniques in prison, a whole lot of kids are growing up without their parents at home.

This sad fact wasn’t lost on the producers of Sesame Street, who decided to address the issue by introducing a new Muppet: Alex, a hoodie-wearing, blue-haired, green-nosed character whose dad is stuck in the clink. He’s going to teach the Sesame Street gang, and therefore the youngsters watching Sesame Street, how to cope when a parent fights the law and the law wins.

It shouldn’t come as a surprise that Sesame Street would tackle an issue like this — they’ve discussed hunger, death, divorce, and more for the past 40 years — and the Muppets and their Muppeteers should be applauded. Still, we’re not sure the plans they have for future Muppets that address issues kids face today are all totally necessary. But you be the judge …

• Jacob, the Muppet who is allergic to everything … well, except felt

• Tiny, the morbidly obese Muppet whose parents nevertheless continue to feed him like a veal

• Sally, the Muppet who was held captive by a madman for the majority of her adolescence

• Thad, the Muppet from a privileged upper-middle-class white family who, via his dress and demeanor, tries to pretend that he is the exact opposite of all of that

• James, the Muppet from a privileged upper-middle-class black family who is given a BMW 3-series for his 17th birthday, and then proceeds to be pulled over by the cops about once a week

• Skippy, the Muppet who survived a school shooting

• Vegas, the Muppet whose parents seriously named her “Vegas”

• Millie, the Muppet who grew up a child star before descending into a drug- and mental illness-induced downward spiral that will no doubt end in either imprisonment or death

• Shane, the Muppet accepted to a very respectable four-year university without actually knowing how to read

• Jimmy, the Muppet who is objectively terrible at every single sport he plays, and yet whose room is filled with trophies