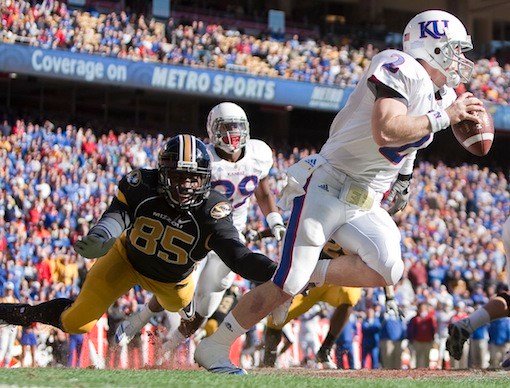 But the best rivalries in American sports are those generated by the once-a-year gridiron clashes between longstanding college football rivals. Think about it: If you cheer on the Tigers, you’re a Tigers fan. But if you went to the University of Michigan, you are a Wolverine.

And even if you never made it out of the 10th grade, it’s still a blast to watch rival college football teams go after each other. Sometimes there’s a national ranking or a spot in the BCS championship game at stake, but most of the time the only thing at stake is the opportunity for one school’s students and alumni to demean the essential human worth of the other school’s students and alumni. Which we’re pretty sure is why the NCAA invented sports in the first place.

11. KANSAS vs. MISSOURI
First Game: 1896
Series Standings: Tied 55-55-9
The “Border War” between these two schools is personal. Former KU football coach Don Fambrough once reportedly refused to see a specialist in Missouri to treat a serious medical condition. Former Missouri basketball coach Norm Stewart would not let his team spend the night or even buy gasoline for the bus in Kansas during road trips so that they would not contribute a cent to the state’s economy. The intensity of these schools’ mutual hatred is fueled by still-recalled Civil War massacres and raids that their respective forces inflicted on each other. (Four years ago, when the teams were in the unusual position of playing for the nation’s #1 ranking, their respective fans wore t-shirts to the game featuring historic photos of the bloody consequences of their states’ Civil War battles.) And the games also take on special meaning these days because the series standings are so close (though Missouri claims one more victory in the series than Kansas acknowledges).