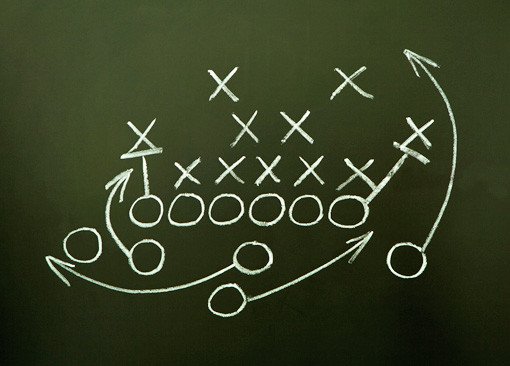 Whether it’s in college or the pros, running a trick play in football either ends with a team or coach being celebrated for pulling off such a ballsy play, or getting ridiculed for being desperate enough to resort to trick plays. That’s not how things go in the movies (which is shocking because we always believed movies were so true to life).

When a movie football team runs a trick play, there’s lots of slomo, dramatic music, loud grunts from clashing lineman, and gratuitous crowd shots to remind us how much is on the line with this one play. That said, there have been some amazing trick plays in movies — and they aren’t all football movies. Well, one isn’t. So if you see these plays pop up on Saturdays or Sundays this season, know they were inspired by the movies, which were, uh, actually inspired by real life.

#1.) THE OOPTY OOP | VARSITY BLUES (1999)
A pass play designed to overload the defense on one side with decoy receivers, so that they’re forced to cover the offense’s strongest receiver one-on-one.

Who ran it?
After Coach Bud Kilmer (Jon Voight) goes postal in the locker room, interim West Canaan coach Lance Harbor (Paul Walker) decides to run a play that was previously condemned by Kilmer in the championship game.

Does it work?
Assuming the receiver outclasses the defender, which is the point of the play, it will totally work. If the the receiver doesn’t score and can get out of bounds in a clock situation, even better. The Missouri Tigers lined up in an exact version of the movie formation against Florida (see pic below).