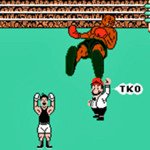 Can you still recite the Konami Code (aka Contra Code)? When you look at drainpipes, do you think of warping? Have you ever knocked Mike Tyson and his shifty eyes on his ass? If so, you are either Buster Douglas or a big fan of the original Nintendo Entertainment System. And if you’re like us, you spent much of your childhood indoors when you could have been attempting to touch boobs — but those Triforce pieces weren’t going to put themselves together.

So to pay homage to our favorite 8-bit video game console, we asked the crew who put together our Halloween supercut video of Hands Shooting Up Out Of The Ground to compile the endings to our favorite NES games — some of which we saw back in the day, some of which we spent hundreds of hours trying in vain to see before Mom made us turn off the NES and go to bed. Well, now we’ve showed her!