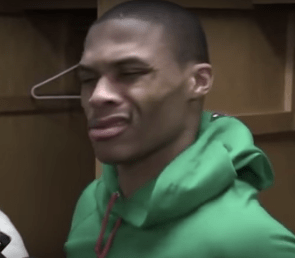 We’re fans of sports, but as far as the interviews go? Unless it’s Richard Sherman spouting off about how Marshawn Lynch honestly saying “I’m just here so I don’t get fined.” when reporters ask stupid questions, we’re not interested. Seriously, how is someone supposed to answer this question: “How do you feel?” after his team A) wins the big game, or B) loses the big game.

Clearly, he is feeling pretty damn good, or pretty damn bad. But that’s nothing compared to what female athletes are asked. Whether it’s about their hair, body, skin, or how they look, reporters, for some reason, aren’t shy about perpetuating dumb stereotypes through their post-game interviews. #CoverTheAthlete turned the tables, asking male athletes the same dumbass questions female athletes are commonly asked. Their facial expressions are, as you can imagine, priceless.