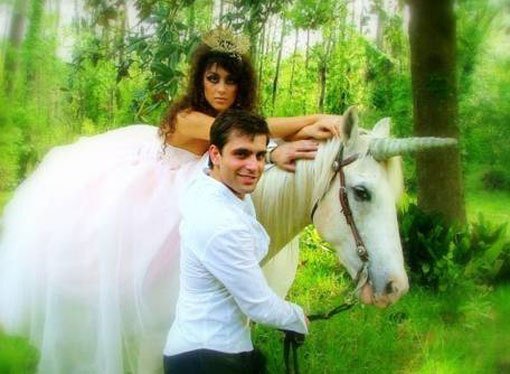 If you buy into the old-school line of thinking, a guy should spend two months’ salary on the engagement ring for his bride to be. Of course, if all you can afford is a Lifesaver candy, that most likely won’t fly. In 2012, couples paid an average of $4,000 on rings; her wedding band was another $1,000 and his wedding band was $500, on average. What does this tell you? Weddings are freaking expensive as hell!

So if you know you’re going to spend a bundle of loot on the big day, why cheap out on the engagement photos? Seriously. The average wedding now costs in excess of $30,000, so what’s another $500 or $1,000 to take a decent photo? The couple above clearly had no qualms about spending money on their engagement photos; their issue was a lack of taste. Point is, it’s not a bad idea to schedule a photo shoot, snap some pics, and change outfits and locations once or twice. During that, if you want to do something clever or interesting or out of the ordinary, go for it.

And while we’re just as sick of seeing cheesy engagement photos on our Facebook feed as you are, that’s infinitely better than ones that involve goofy sweaters and shoeless pets, or posing in front of a sewer tunnel. You know, like these people did with their engagement photos …

START GALLERY: A MAN WITH NO HANDS, FEET, OR FACIAL FEATURES

People enjoy riding motorcycles for a variety of reasons. A good number of riders choose these two-wheelers...