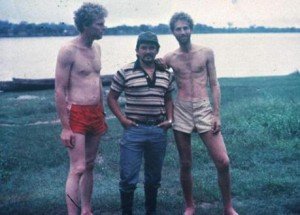 LOST IN THE AMAZON


“The toughest moment was after a few days, when I realized that I was completely alone.” — Yossi Ghinsberg

Fresh out of the Israeli military back in 1981, Yossi Ghinsberg  joined three other dudes to explore a remote part of the Tuichi River in the Bolivian jungle. One of his traveling companions claimed to be an “expert” on the area who could lead them by raft to an undiscovered ancient village. Weeks later, Yossi and the gang realized the expert had gotten them lost. Disagreeing about what they should do, the quartet split up; Ghinsberg and his American friend Kevin took the raft while the other two … well, nobody knows for sure. They weren’t seen again.

Ghinsberg’s ordeal was just beginning, however. Approaching rapids, the raft slammed into a rock and threw the two men into the drink. Kevin made it to shore; Yossi didn’t. He floated downstream until he plunged over a waterfall, narrowly escaping a drowning death before making it to shore. He was alone with no radio, no tools, no gun, and no idea where he was.

For the next 19 days, Ghinsberg faced numerous challenges. He woke up to a swarm of termites feasting on patches of his skin and clothes after he urinated on himself out of exhaustion. He took a bad spill and, yes, was rectally impaled by a broken stick. He sank chest-deep into quicksand twice. He was awakened by a jaguar … because he felt its breath on his face. Sick, starving, and exhausted, he began seeing apparitions and hearing voices.

Which almost made him ignore the real voice calling him from a rescue boat; Kevin had miraculously managed to find a group of locals, who formed a search party, which finally found Ghinsberg.