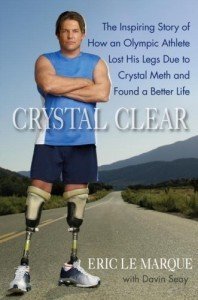 “I remember falling back into the snow, looking at my feet and going, ‘You’re going to lose your feet.'” — Eric Le Marque

Hockey players generally aren’t pansies, especially those good enough to play in the NHL and on an Olympic team (even it is France’s). But no amount of toughness could help Eric Le Marque stave off frostbite and gangrene after getting lost for seven days in the Sierra Nevada wilderness.

Le Marque, a snowboarder, was taking one last run at Mammoth Mountain in California when a blizzard threw him off course; he wasn’t able to find his way back before dark. With little more than an Mp3 player, his clothes, and a snowboard, he spent the night in the woods and attempted to hike his way back the following day. Unfortunately, he was hiking further into the wilderness.

Le Marque survived on a diet of pine nuts and bark, washed down his meager food with river water and melted snow, and did his best to avoid hunting wolves. For shelter, he used his snowboard to dig “crude igloos.” After several days, hypothermia had set in and his frostbitten feet were black and purple, but Le Marque still had his wits about him to figure out how to MacGyver his MP3 player and find a radio signal that led him back from the resort. He later learned that helicopters had been flying over the area looking for his corpse.

Much like many aspects of the gambling industry, the world of lottery has been revolutionized by online...