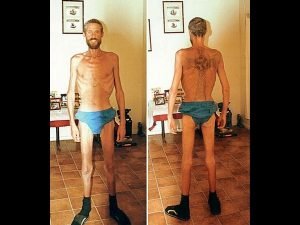 LEFT FOR DEAD IN THE OUTBACK

“If you have to [drink urine], I suggest you let it cool down first. It doesn’t taste very nice.” — Ricky Megee

A walking skeleton. That’s how the man who accidentally discovered the emaciated body of Ricky Megee at an Australia cattle station in 2006 described his condition. That’s what 71 days wandering the desert will do to you.

Megee claims that while driving along the Butine highway near the border of Western Australia he stopped to help a couple whose car had broken down. His next memory is waking up face down in a hole with plastic, rocks, and dirt covering him. According to Megee, he had been drugged and robbed, and that pit was meant to be his grave. For the next two months, Megee lived in makeshift shelters and feasted on leeches, snakes, lizards, and insects. He drank urine before finding rain puddles and a seasonal river as a water supply. By the time he was rescued, he’d dropped from 230 to 105 pounds and barely had the strength to walk.