Back to the Future was released in 1985, with sequels being released in 1989 and ’90, respectively. If you don’t remember that, you’re clearly far younger than the lame old men who write these posts. That said, youngins, the films are amazing and still hold up — yes, even Part III. Since it’s impossible to build a time-traveling car (we’ve tried), the next best thing is to litter your home or wardrobe with relics from the film. Of course, this mean starting with … #1. Back to the Future: 25th Anniversary Trilogy [Blu-ray] ($29 @ Amazon.com)
The 25th Anniversary box set gives you all three films as well as behind-the-scenes views of Marty McFly and Doc Brown as they disrupt the space-time continuum again and again in their souped-up DeLorean. Also, there’s Biff, a gross close call with incest, and two casting changes (Marty’s dad George and his girlfriend Jennifer).  Plus, when you need a gift for someone, the trilogy is a great option for just about any occasion. Well, except for an anniversary gift for your girlfriend. 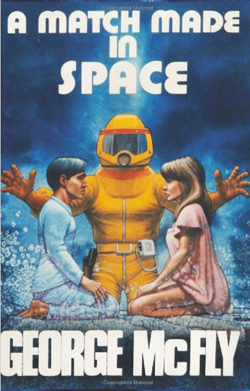 #2. A Match Made In Space: A Journal Back from the Future ($9 @ Amazon.com)
George McFly’s bestselling book A Match Made In Space detailed how some alien being came down from the planet Vulcan and blasted some weird noises into his ears before forcing him to pursue his future wife. Your journal can be slightly less odd, as this blank journal with the A Match Made In Space cover is a cool novelty item filled with blank pages to note plot holes in your own life or your own time travel (aka aging) saga.

Next: DeLorean Art For Your Pad