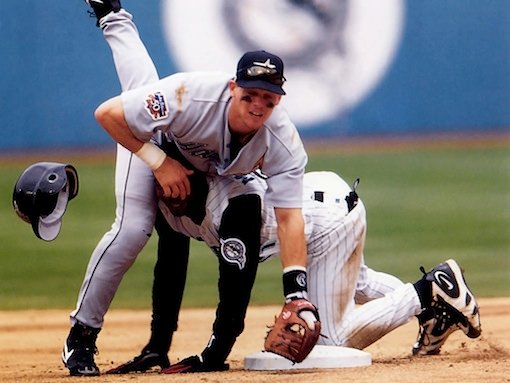 Old-timey sportswriters, historians, and blowhards still love to wax poetic about how the start of baseball season heralds the rebirth of man or some such nonsense. They’re full of it, but Opening Day does signal the season during which we can all sit outside, drink beer, and heckle Miguel Cabrera and Prince Fielder for being baseball’s version of WWF tag-team duo Earthquake and Typhoon.

There’s a lot to love about baseball, but 162 games is a long slog, and it’s hard to maintain focus for the whole ride. So heading into the start of the 2012 season, we figured it was a good time to go over 9 things worth keeping an eye on this season before rushing out to buy the baseball tickets — in addition to Derek Jeter’s latest girlfriend.

1. JAMIE MOYER IS OLD
When Colorado Rockies pitcher Moyer ambles to the hill this spring to unleash his devastating 80 mph fastball on opposing players, he’ll be the oldest starting pitcher in Major League Baseball since 1932. After missing the entire 2011 season with elbow trouble, Moyer made the rotation despite looking like Troy Tulowitzki’s dad, which tells us that A) the Rockies’ rotation is not very good this year and B) it’s good to be left-handed.

2. THE RED SOX ARE SOBER
Budweiser became the scapegoat for the epic Red Sox collapse last season [Ha ha! —Ed.], and infamously even-keeled new manager Bobby Valentine banned the brew from the clubhouse, making Boston the strangest band of teetotalers since CM Punk. I’ve been in my fair share of MLB clubhouses, and trust me, beer is a common post-game drink. So expect to see a lot of brown paper bags and Solo cups with “soda” or “juice” for the thirsty Sawx.

How to spot a rogue Ireland online casino

The Good and the Bad of Path of Exile 2

Must haves for every athlete