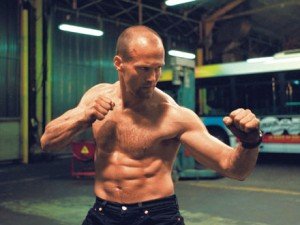 Reason: Statham currently makes about $6 million per movie — that’s a cool mil per ab. If the Jason Statham six pack more closely resembled the Jason Alexander gut, however, he’d be lucky to make 1/100th as much. (How did we arrive at that number? It’s called science.) That’s why The Stathamator requires $990,000 of coverage per ab.

Terms: Statham shall be subject to monthly spot inspections in the form of surprise attacks by ninjas and mercenaries hellbent on delivering brutal gut punches. In addition, the presence of delicious but fatty British treats like “chips” and/or Scotch eggs in his system shall represent a breech of contract.