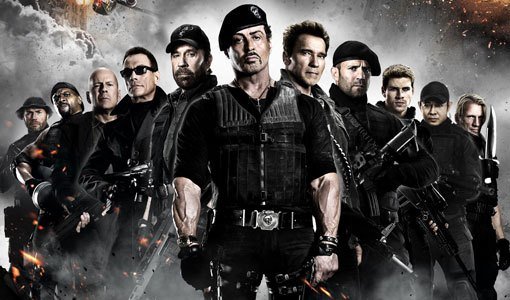 The Expendables 2 is set to prove that geezers like Sylvester Stallone, Arnold Schwarzenegger, Dolph Lundgren, Jean-Claude Van Damme, Bruce Willis, and Chuck Norris can still kick serious ass. The good news is that E2 has managed to gather the A-list of all-time action-movie stars; the bad news is that as a result, whether or not you liked the original Expendables, E2 will be far from the best action flick in which the dudes in the film have starred. (Okay, except maybe Dolph.)

What are the best action movies in which these guys have starred? We’re glad you asked, because we’ve chosen what we think are the cream of the crop. (Since we’re looking at action movies, that means we didn’t consider classics like Rocky, Pulp Fiction, or Twins.) If you think our choices are off the mark, let loose on us in the comments section.

SYLVESTER STALLONE | FIRST BLOOD (1982)
When a tyrannical small-town sheriff (Brian Dennehy) backs peace-loving but somewhat, uh, troubled Vietnam veteran John Rambo into a corner, things turn ugly for the 5-0. The action takes a while to get started, but it’s worth the wait. And in the meantime, we’re treated to beautiful Pacific Northwest scenery and nightmarish flashbacks to Vietnam!
Runner-up: Cliffhanger (1993) is so bad it’s good. John Lithgow puts on a very … ambiguous accent as a madman in search of the stolen money he accidentally dropped from an airplane over the Rocky Mountains. Stallone plays a leotard-wearing mountain-climbing hero. Obviously.

ARNOLD SCHWARZENEGGER | PREDATOR (1987)
There are several Arnold movies that vie for the top spot — that’s why we couldn’t agree on a single runner-up — but Predator comes out on top for a few different reasons. There’s the colorful cast of misfit soldiers who give The Dirty Dozen a run for the money. There’s the handshake arm-wrestling match. There’s the scene where one of those arms is blown off. There are the special effects, which by and large still hold up. And of course there is the awesome, awesome dialog; Commando and The Running Man may have more post-kill one-liners, but Predator has quotable lines throughout, including what may be the best action-movie line ever: “I ain’t got time to bleed.”
Runners-up: We’re not even going to try to pick between Conan the Barbarian (1982), Commando (1985), and Terminator 2: Judgment Day (1991).

BRUCE WILLIS | DIE HARD (1989)
Unlike Arnold, Bruce doesn’t even have a close runner-up because Die Hard may very well be the best pure action movie ever made. Bruised, battered, shoeless, and bleeding out, John McClane (Willis) goes all SEAL Team 6 on terrorists at the Nakatomi Plaza. The movie has a tight script, a classic bad guy in Hans Gruber (Alan Rickman) — we don’t think there’s ever been a better action-movie villain — and just the right amount of humor.
Runner-up: Yes, The Fifth Element (1997) is a sci-fi flick, but it has plenty of action. Plus, the ending of Die Hard: With a Vengeance (1995) is so epicly bad that we had to disqualify it.

JASON STATHAM | CRANK (2006)
Crank is full of bullets, blood, and plot holes, but its goofy premise and fast pace make it a helluva lot of fun to watch. In fact, it’s sort of like the movie Speed on crack … or speed … or crank. (And with Amy Smart instead of Sandra Bullock.) The action sequences are cool, but the ridiculous public sex scene is both funny and, in a bizarre way, graphic.
Runner-up: If there’s one thing you learn from The Transporter (2002), it’s that you should never open other people’s mail … unless you dig Asian chicks.

JET LI | FIST OF LEGEND (1994)
Even with sub titles, we’d watch Fist of Legend twice before suffering through Lethal Weapon IV once. Why? Watch this video where Jet Li busts up an entire martial arts school of dudes wearing MC Hammer pants without so much as breaking a sweat — and that’s just one of the many great fights.
Runner-up: Hero (2002) has lots of great action scenes and a genuinely compelling storyline, and Li has one of the most metal death scenes ever.

DOLPH LUNDGREN | SHOWDOWN IN LITTLE TOKYO (1991)
The process of “acting” may take something of a backseat in this movie — besides, Lungren could never top Ivan Drago or He-Man — but watching Dolph play a no-nonsense cop will still make you want to punch first, ask questions later, and effortlessly hurdle moving vehicles (go to :54 in the video to see Dolph’s leap) if you’re ever chased by the nefarious Iron Claw Yakuza clan.
Runner-up: We’re gonna be honest — Dolph has not been in a whole lot of good movies. But in I Come In Peace (1990), a perp tells Dolph’s character that he, uh, comes in peace. Dolph’s reply? “And you go in pieces, @sshole!” Brilliant.

JEAN-CLAUDE VAN DAMME | BLOODSPORT (1988)
Far more watachable than Kickboxer and way less cheesy than later efforts like Knock Off, Sudden Death, and Double Impact, Bloodsport is Van Damme at his finest. It’s full of badass training and fighting montages, and Ogre from Revenge of the Nerds plays JCVD’s sidekick. What else could you possibly want in a 80s action flick?
Runner-up: Hard Target (1993) is not director John Woo’s finest work, but there is a scene in which JCVD, sporting a mullet, a terrible creole accent, and Wilford Brimley as a sidekick, punches out a snake. That’s right — he punches. out. a. snake.

CHUCK NORRIS | RETURN OF THE DRAGON (1972)
Chuck Norris jokes are beyond played, but his turn as a villain in this movie — Bruce Lee’s directorial debut — will always hold up. It’s a spectacular kung-fu flick with, unsurprisingly considering who was at the helm, awesome fight scenes, none awesomer than the one Lee has with a pre-wig Norris.
Runner-up: Here’s all you need to know about Delta Force (1986): USA! USA! USA!