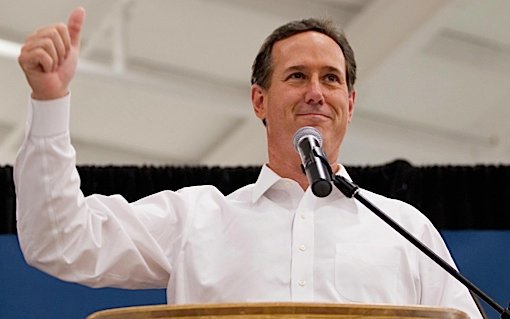 Another one bites the dust in the GOP presidential primary. Today, Rick Santorum and his sweater vests bowed out of the race in light of both Mitt Romney’s delegate lead and the medical problems of Santorum’s young daughter. But, much like his former rivals Michele Bachmann and Rick Perry, Santorum gave us some good laughs along the way. And for that, we want to thank him … by pointing out a few of our favorites one last time.

ON PRO WRESTLING
Before he was a politician, Santorum worked for the WWF. No, not the World Wildlife Federation — they’re a buncha godless Commies! We mean the World Wrestling Federation. In 1987, Vince McMahon was trying to get the Pennsylvania State Athletic Commission off his back, so he hired newly minted lawyer Rick Santorum to convince state authorities that wrestling didn’t count as a sport, and so shouldn’t be subject to state medical regulations. Santorum succeeded. Remember all those steroid-addled pro wrestlers who died untimely deaths — and, on occasion, killed other people as well? Yeah …

ON HOME SCHOOLING
When you hear that someone has been home-schooled, you probably don’t think, “Gee, that person must be well-rounded and perfectly socialized.” But according to Santorum, it’s the other way around — the perfect place for children to become used to the real world is to stay at home. Wait, what? If you can understand what he means in this clip, please let us know in the comments.

ON HABLA-ING ENGLISH, POR FAVOR
Campaigning in Puerto Rico last March, Santorum announced, “Like in every state, [Puerto Rico must comply] with this and every other federal law — and that is that English should be the main language.” He continued by saying that Puerto Rico “needs to be a bilingual country, not just a Spanish-speaking country.” One, we’re no political strategists, but it doesn’t seem like a great campaign strategy to say that in Puerto Rico. Two, there’s no law that says anything about English being the “main” language in the U.S. Three, Puerto Rico is largely bilingual. Four, it isn’t a country.

ON THE EVILS OF EDUCATION
“President Obama wants everyone in America to go to college. What a snob.”

ON “BLAH” PEOPLE
What’s all the fuss about? He clearly says “blah people,” just as he claimed afterwards when people were all, “WTF?!” Why, what did you think he meant? 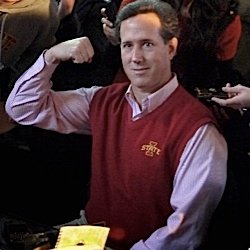 ON SWEATER VESTS
“One of my supporters said this is my Second Amendment vest: The right to bare arms.” Actually, that’s not a bad line.