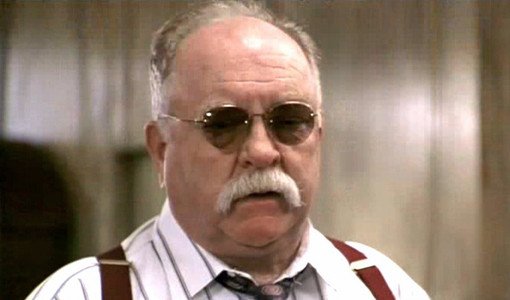 Wilford Brimley is a solid character actor who’s been working for decades. But he’s probably best known for hawking oatmeal and talking about diabetes in an unintentionally hilarious way. Oh, and he also has an enviable mustache. So let’s honor Wilford on his 78th birthday by eating some oatmeal, avoiding processed sugar, and looking back on Wilford’s life and career …

1934-1969
A. Wilford Brimley is born on September 27, 1934 in Salt Lake City, Utah. Before becoming an actor — thanks in part to his buddy Robert Duvall — Wilford works as a ranch hand, wrangler, bodyguard for Howard Hughes, and blacksmith. He’s already way cooler than us.

1976
Brimley is cast in the TV show The Oregon Trail, which is slightly less beloved than the video game of the same name, and canceled after half a season.

1979
As Ted Spindler in The China Syndrome, Brimley proves his moustache is capable of sharing the screen with legend Jack Lemmon and commie Jane Fonda.

1979
When Brimley is diagnosed with diabetes, he begins a crusade to raise awareness and find a cure. Today, there’s still no cure, but Brimley definitely raised awareness by making generations of dickheads — including us — giggle at his pronunciation of the disease: “die-a-bee-tus.” Geez, just reading that makes us laugh.

1982
In John Carpenter’s The Thing, Dr. Blair (Brimley) goes berserk when his blood sugar gets all outta wack due to a missed breakfast. Not really. In reality, he’s pissed that a horrific alien creature is infiltrating his Arctic base. This is one of our favorite movies, and it’s in part thanks to Wilford’s performance.

1984
In The Natural, Wilford plays Pop Fisher, the curmudgeonly manager of the New York Knights. After Pop heroically leads his team into last place, a middle-aged rookie named Roy Hobbs (Robert Redford) joins up and the Knights get good. The movie is far, far better than the way we’re describing it.

1985
As Ben Luckett in Cocoon, Wilford dips his wrinkly old body into a pool that acts like a fountain of youth thanks to some alien eggs in it … or something. They’re not eggs exactly. We can’t think of the word for them. Anyway, this movie is only somewhat better than the way we’re describing it.

1980s-1990s
Wilford, playing himself, reminds the nation that breakfast should consist of oatmeal instead of sugar. Okay, fine. We can’t say no to that mustache!

1993
Displaying impressive range with his bayou accent — just kidding, it’s terrible! — Wilford shares the screen with Jean-Claude Van Damme’s mullet in Hard Target. As Uncle Douvee, a master archer, Wilford puts Robin Hood’s skills to shame as he somehow uses one arrow to create a string of explosions that cause the bad guys to run for cover.

1993
As a head of security for a, um, firm in The Firm, Wilford’s character puts the scare into young hotshot lawyer Mitch McDeere (Tom Cruise) when he thinks McDeere might rat out his employers to the Feds. Sorry, but it’s hard to buy the Quaker Oats “die-a-bee-tus” guy as a heavy.

1997
Brimley appears on an episode of Seinfeld as the Postmaster General, who confronts Kramer about his campaign to boycott the mail. Sadly, he fails to warn Kramer that slinging racial slurs during stand-up routines is a bad career move.

2009
In Did You Hear About The Morgans?, the hilarious rom com starring Sarah Jessica Parker and Hugh Grant as a couple in the witness protection program, Wilford plays a … actually, never mind. It’s too bad to ever watch.