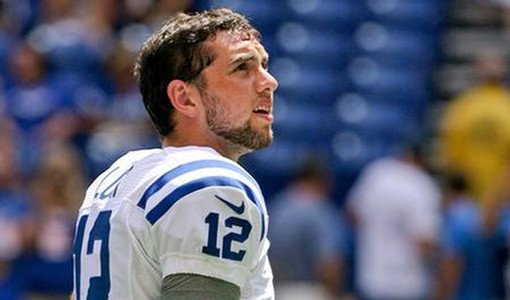 For the No. 1 pick in the 2012 NFL draft, Andrew Luck is surprisingly a down-to-earth guy. The Stanford graduate was heralded by most experts as a can’t-miss pick for the downtrodden Indianapolis Colts, who parted ways with NFL legend, Saturday Night Live veteran, and seasoned commercial pitchman Peyton Manning to make way for Luck.

So far this season the Heisman Trophy winner from Stanford University has lived up to the billing, leading the youthful Colts to a respectable 1-2 start while throwing for five TDs. During a bye week, Luck chatted with us about his role in the NFL PLAY 60 Super Bowl Contest presented by Quaker and his “rookie rules” for kids. We, of course, threw in a few “unique” (his words, not ours) questions as well.

Your Quaker “rookie rules” for kids include get rest, eat breakfast, and find the right teammates. Do you follow all of them?
I think so. I’m terrible if I don’t sleep enough — mood-wise, I get antsy. I try to get as much rest as I can. As an NFL player, I’m always moving around. And I do have teammates — for better or worse (laughs).

Who are you more tired of being compared to: Robert Griffin III or Peyton Manning?
That’s a good question. I don’t know. I think I try not to read many articles or watch TV. If people are comparing us, it goes above my head. I’ll say neither.

You ever think of coming up with a catchy nickname, like RGIII?
I tried that in middle school and high school. Some people called me Lucky Charms. Then there was Drew, but that never stuck. By and large, 90 percent of teammates have called me Luck. That’s good enough for a nickname.

A long-standing NFL training camp tradition is the rookie skit or song — which did you have to do?
I did a song. “Country Roads” by John Denver. It was probably one of the top five worst renditions of it ever.

Either on or off the field, what’s been the most surprising thing about playing in the NFL?
One is that everybody is fast and good on both sides of the ball. The speed has kicked up a notch. And [another is] that Wednesdays and Thursday are long workdays. It’s amazing that you can spend 12 hours on football.

You’ve had some non-traditional facial hair looks. Can you discuss your facial hair strategy?
My mom governs it, I think. I just sort of let it grow and when she sees me and deems it time cut it, I do.

You no doubt caught the attention of plenty of coeds while you were at Stanford. But do women react differently to you now that you’re an NFL quarterback?
Uh … you know, I don’t think so. I have a girlfriend, so I haven’t noticed. (More here on Andrew Luck’s girlfriend.)

How’s the nightlife in Indianapolis? Does it compare to Palo Alto?
It’s very different. But the people here are amazing and very nice. It’s surprising how many good restaurants are in the city. You can walk anywhere and have fun with new stuff.

There are five starting rookie QBs in the NFL this year. It’s obviously early in the season, but which one of you do you think has performed the best so far?
One, I haven’t seen any other rookie QB perform, but everyone is in a totally different situation. Two, that’s an unfair question.

You’ve probably been asked this a million times, but is (Colts owner) Jim Irsay as crazy as he seems on Twitter?
I think Mr. Irsay is a perfect owner. His Twitter is a great way to engage Colts fans and give them insight and a little fun into what the team is doing. He’s a lot of fun to have as the head of your franchise.

You’re an architectural design major, so how would you create the ultimate man cave?
I think big, comfy furniture is key — any piece of furniture that can be nap-able on. You need fridges around the area so you don’t have to walk too far to get a cold beverage. TVs with every channel and video games. And you gotta have a ping-pong table.