The initial release of Google Maps was back in the early 2000s, and it’s since undergone major overhauls and updates (much like it’s maddening SEO algorithm!) to provide humanity with stunning images of our planet via Street View.On the other side of that, Street View has also shown us less flattering side of humanity (see photo above … and 29 more on subsequent pages). It’s easy to understand why when you realize Google Maps (including Street View) has collected more than 30 petabytes of data. That translates to 21 million GB, or 20,500 TB, according to Mashable.com.

Also: These 20 Photos Are Guaranteed To Make You Double Take 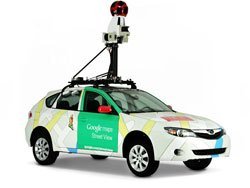 Every two weeks or so Google updates its Street View image inventory. Sometimes this can be pushed back or hindered due to inclement weather or an enormous alien spaceship blocking its view (we may have made that last one up … maybe). The Street View rolls around in ugly cars (see left) that are equipped with cameras that have 15 lenses that can produce images with 65 MP resolution. Your iPhone 6, by comparison, has 8 MP.

Also: These 40 Pics Are So Awkward You Won’t Be Able To Turn Away

Anyway, we’re getting off topic. The point is, Google Street View and Google Earth take lots of pics — and lots of them are, uh, not so flattering. From forgotten undies to peeing dogs to peeing people to soliciting prostitutes, we now have a new appreciation for Google Maps’ Street View …