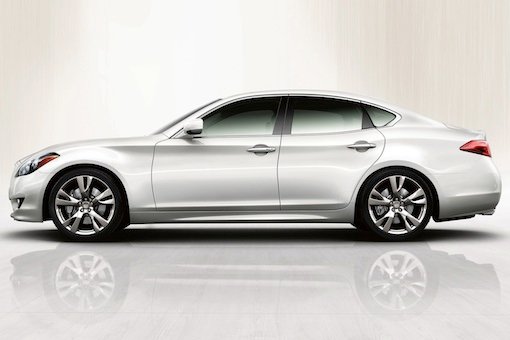 Twenty-four hours before I discover the wheels missing, the M56 looks pretty much like this. To me, test driving a new car is nearly as exciting as the day a jowly hag at the DMV plopped my freshly minted driver’s license into my sweaty 16-year-old palm. It gives me the same feeling of freedom — especially when the new car is a $64,610 2011 Infiniti M56, looks more curvaceous than Salma Hayek in a bustier, and boasts a 420-horsepower V-8 engine.

So when 6pm rolls around, I bolt out of my desk-jockey day job to liberate my ride. I pick up the ladyfriend from her gig a few blocks away and cut through Times Square. I immediately notice the sedan’s sculptural interior door handles, comet-shaped pieces of aluminum that trail off into a backdrop of quilted leather. And the same brushed-aluminum trim outlines the wood on the console. On the whole, the sumptuous Infiniti makes king-of-interiors Audi look like a man with a laser sight aimed at his back.

Despite the rush-hour traffic, it doesn’t take long for me to begin messing with the tech. The 8-inch touchscreen intuitively services all of my infotainment needs: GPS, XM radio, iPod input. I turn on Forest Air, which supposedly varies the airflow coming from the vents so that it feels like a real breeze. The effect isn’t noticeable, but I did appreciate the accompanying air purification, since driving through certain New York hoods is a recipe for trenchlung.

Infiniti offers innovative safety options like lane departure warning — an aggravating beep that lets you know you’ve driven over a line — and its big brother, Blind Spot Intervention, which tugs the car back into the lane if the Infiniti senses another vehicle in your blind spot. It’s well intentioned … but ultimately annoying. If you’re smart enough not to drive while sexting, save yourself $3,000 and skip it.

I’m delighted, however, that my Harbour Blue M56 boasts the Sport Package. For $3,650 you net a host of go-fast/look-cool parts, including a tighter suspension, bigger brakes, paddle shifters for the 7-speed tranny, and shapely 20-inch alloy wheels wearing beefy summer tires that perform nicely as I weave through city traffic.