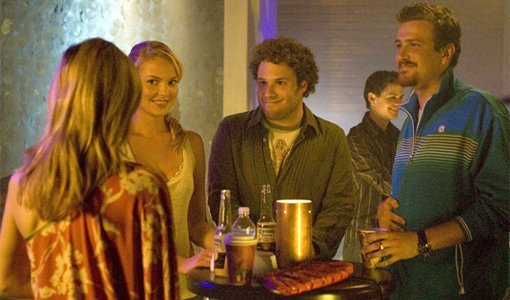 We’re not going to start off with the “be yourself” garbage because it’s empty. Even when you’re “you” things like anxiety or anticipation can creep up and leave you feeling out of your element. To make a good impression on her friends you have to do what you’d normally do — be on your best behavior and exercise politeness.

Is that all? Not a chance. But it gets you off to a good start. Unsurprisingly, people — guys or women — don’t enjoy being around some  drunken slob or uppity prick. It’s a giant turn-off. And you can tell rather quickly whether your humor or attempts are hitting or missing by reading her body language. If you’re off the mark, adjust as necessary, and then apply these tips to increase your odds of success …

#1. Make an Effort
When someone clams up and shuts you out, what’s your take? They’re dicks, right? Right. So don’t be a dick. Even if you’re outnumbered, make a point to join the conversation. If they’re talking over your head or about topics you either A) don’t know about or B) don’t care about, make it a point to learn or care. The objective isn’t to dominate the conversation or takeover; it’s about adding to the discourse.

#2. Listen
Don’t interject or one-up her friends’ stories. It’s easy to do — you and your buddies probably do it without much thought — so make a point to pull back. Just listen, and chime in when you have something to stay. Don’t force it.

#3. Ask Questions
Make sure they’re relevant questions. An easy way to do this is to build off of the last thing said. That way, you’re not holding onto something mentioned in a five-minute soliloquy, effectively blocking out other plots points in the story. It’ll also demonstrate that you’re paying attention. Example:

Her Friend: I hate my job. It pays me $10 million, but every person there looks like a walking turd pile. And they smell like that, too!

You: Wait, does your office have a policy against using deodorant?

Her Friend: Right? No, I’m exaggerating. But from their dress code to everything else,  there’s no effort. I never know what to wear to fit in.

You: Do you typically end up dressing up?

And so on. Okay, so it’s not the most explosive conversation ever, but it keeps things going and you’re playing off of what’s said. If you can pivot into a better conversation, pivot away. If you can’t

#4. Contribute Something
If you’re going to her friend’s house or you’re showing up at her place when everyone’s already there, show up with something — wine, bread and cheese (fresh-baked bread and cheese that isn’t individually wrapped in plastic), etc. If you’re meeting them out, spring for a round of cocktails or beers. They’ll appreciate the gesture — as will your girlfriend.

#5. Go Alone
Having your buddies around would be a solid buffer, but if you can handle it, go it alone for the first hangout session. The more people you add to the mix the less face time you’ll get to spend with her pals. Your objective is to make a connection with them, so the more time they’re able to spend with you, the better chance you have at achieving success.

Also Read: How To Read Her Body Language
We asked a former investigator to detail the signs that she’s interested in you, or interested in hitting the road.