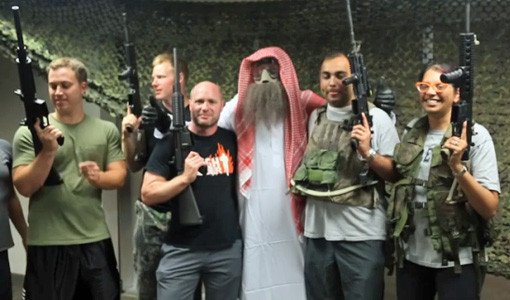 ‘Coptering into hostile territory in the middle of the night to take out Osama bin Laden on behalf of your country? Sounds pretty awesome …  except you don’t have years of Navy SEAL training. And helicopters make you nervous. And you don’t like to travel outside the tri-county area. Luckily, as long as you can will yourself to make it to New Hope, Minnesota, you can recreate the experience of killing bin Laden for the low, low price of $325! (No Navy SEAL training required.)

The freedom-loving patriots at Sealed Mindset Firearms Studio are giving people the opportunity to go all SEAL on a dude who sorta looks like bin Laden … if bin Laden wore a child’s Halloween-costume Gandolf beard. Each kill session lasts two hours and includes a mission briefing, firearms safety training with an AR-15 semi-automatic rifle, a pre-mission live test on the shooting range, and the grand finale where you get to pump bin Laden full of paintballs.

Not bad, right? That got us thinking about all the other historic figures who died in notable ways we’d like to pretend to kill in a slightly modified simulation held in rural Minnesota.

ADOLPH HITLER
As the undercover officiant of his pre-death bunker wedding to Eva Braun, we wait for Hitler to say “I do,” then take a pistol out of our hollowed-out Bible and growl, “Oh no you don’t!” before blowing off his stupid mustache.

ABRAHAM LINCOLN
We sneak up on him at Ford’s Theatre, but this time, Abe is ready! He’s armed with his trusty ax and he thinks we’re vampires, so an epic battle ensues. (How did that ever become a movie?)

Anyway, if you want to pretend to kill bin Laden, you’d better hurry; the course is only being offered through the end of the month.