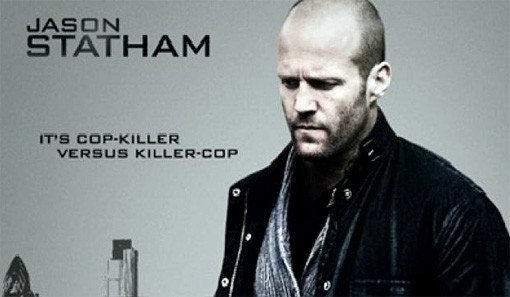 You may not remember Blitz from when it was in theaters, because Blitz never got a U.S. theatrical release. It’s not that the movie was bad. It’s just that it was … well, really British.

Once you’re able to adjust to the accents, you’ll see that Blitz follows a tried-and-true formula for other movies that also star Jason Statham: Lots of ass kicking + driving fast cars + banging hot chicks. This time Statham does it as hotheaded cop Tom Brant. No stranger to rule-bending, Brant’s beat down of a trio of thugs with the preferred weapon of bald men in the UK — a hurling stick — gets him in trouble and costs him his badge. Until, that is, the force needs his skills to catch a fame-seeking serial killer who goes by the name Blitz (Aiden Gillen). Without spoiling too much, we’ll tell you that there’s a method to Blitz’s apparent madness, and it prevents Brant from solving the case.

As you can tell by the promo poster, the “killer-cop vs. cop-killer” storyline is what drives the plot. But subplots abound. Like Blitz’s game of cat-and-mouse with a reporter (David Morrissey), Brant’s clashes with his new and openly gay supervisor (Paddy Considine), and his relationship with cop-turned-junkie (Zawe Ashton). While not on par with The Transporter in terms of action, Blitz also isn’t as hokey. Nor is it perfect; but it does paint a grim reality that’s hard not to get sucked into. Plus, it’s always fun to watch people drive exceedingly fast on the wrong side of the road while Statham beats them up.