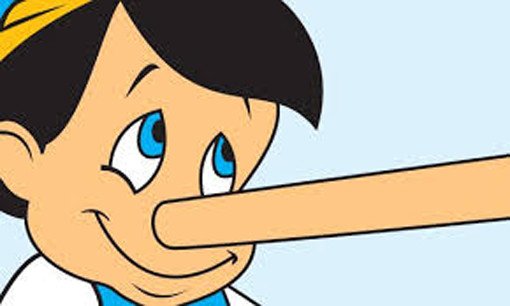 Recent studies coming from of the University London College suggest that human brains can become desensitized to the guilty effects of lying the more that we fib. So, basically, the more you lie the more you accept that you’re a no-good, filthy liar.

Researchers conducted an experiment in which 80 participants were put in a situation to lie to a partner, sometimes for personal gain and others for their partners benefit. The brains of participants were scanned during the experiment to monitor brain activity. Scans showed that the amygdala, a region of the brain concerned with emotions and feelings, became less and less active as more lies were told. This finding suggests that the more individuals lie, the less guilty they feel; hence, the continuous lies that proceed.

Now that we know we may be more inclined to lie once we have started, let’s take a look at some of the most common things people lie about. This list was compiled from an accumulation of surveys conducted online.

1. How they are doing.
When’s the last time someone asked you how you’re doing and you told them: “Shitty. My back hurts, there’s a weird spot on my right nut, and my girlfriend is cheating on me.” Never, right? Our inability to respond honestly has to do with our socialization both in regards to holding back our emotions as well as the formal nature of the greeting.

2. Conditions and Terms of Agreement
Everything we sign up for these days comes with a list of conditions and terms of agreement. People rarely read them, yet in order to continue on with the service, they will hit yes. The fact that this little fib isn’t associated with any other person directly depersonalizes its effects, at least that’s our rationalization.

3. How close they are.
People are often inclined to lie about how soon they will be somewhere when they are running late. This usually comes about when we don’t want other people to become angry or anxious because of our lack of punctuality.

4. About their plans.
We all have used this excuse at least once in an attempt to try and avoid an undesired situation. Instead of simply telling the other person we don’t want to participate, we try to let them down easily and not hurt their feelings by saying we are busy with something else.

5. That they are listening.
Whenever we find ourselves in a conversation that we are having trouble paying attention to, and the other person asks if we are listening, we will automatically say ‘yes’. This lie also comes about in an attempt to keep ourselves from getting into trouble and to not hurt the other person’s feelings.

6. How much they like something.
Sometimes we find ourselves in an awkward situation when somebody asks us what we think about something important to them. We know what response they want, but it’s not what we actually think. Torn between honesty and appealing to the other person, we usually pull out a white lie to avoid the uncomfortable confrontation.

7. About their well-being.
Another lie we often tell others to avoid particular situations is about our well-being. Playing hooky or calling in sick is one of the oldest tricks in the book to avoid work, school and other unpleasant obligations.

8. Wanting to see somebody again.
Whenever we meet somebody we haven’t seen in a long time, we often leave them by saying something along the lines of “we should definitely hang out soon” without truly meaning it. This is one of those polite lies that we tell because we feel somewhat obligated to be nice, regardless of how we really feel. This is another product of social norms and expectations.

9. How bad traffic was.
For those of us that are chronically late, bad traffic is a classic excuse. Nobody can control traffic so it’s a great way to push our responsibility off onto something else. We tell this lie most often to keep ourselves from owning guilt.

10. That they have to leave.
We utilize many lies to get ourselves out of situations we are uncomfortable in. We have all cited some arbitrary reason for having to leave someplace immediately. This way, we have an excuse to leave without having to reveal our distaste for the situation itself.