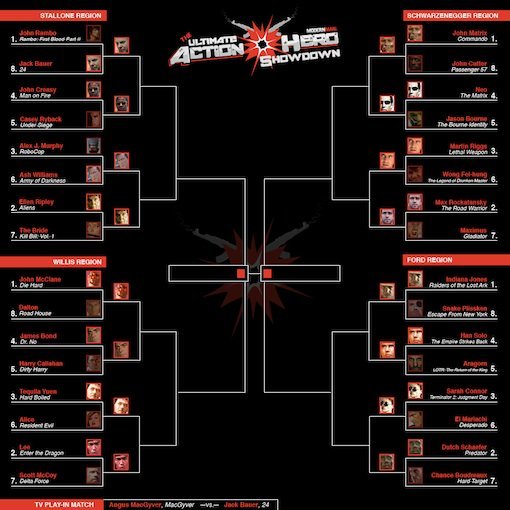 DAY 6: THE SWEET 16 MATCHUPS IN THE SCHWARZENEGGER AND FORD REGIONS
(Click on the bracket for a closer look.) 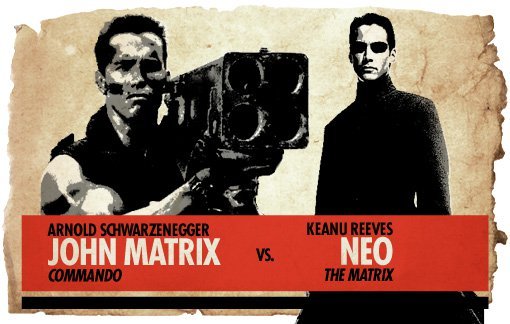 It’s the uber-soldier against the digital chosen one. John, however, comes from a world where action heroes actually had to be physically imposing — there was none of this computer trickery turning emo tech nerds with trenchcoats into kung-fu Jesuses. Neo flips and spins and mumbles something nonsensical about the meaning of consciousness, and while those antics amuse John, he’s got a job to do. So he swats Neo out of the air with a recently hacked tree trunk and frisbees a saw blade into his skull. Will Neo never learn? In the end, the Matrix always wins.
WINNER: JOHN MATRIX 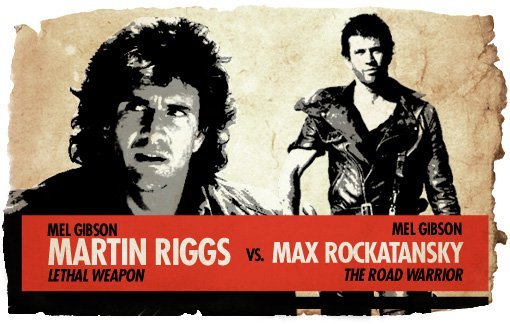 After their respective trainers finish the customary pre-fight “relaxation techniques” (is it really too much to ask that they be blown first?), the wasteland warrior and the cop on the edge square off. What ensues is a Tasmanian Devil-like blur of limbs and smoke and detritus that reduces everything within a few square miles to rubble. Both fighters’ insistence on absorbing as much physical torture as possible draws the fight out, but when the smoke clears, the slightly younger and thus slightly further away from total madness Max stands as the victor.
WINNER: MAD MAX 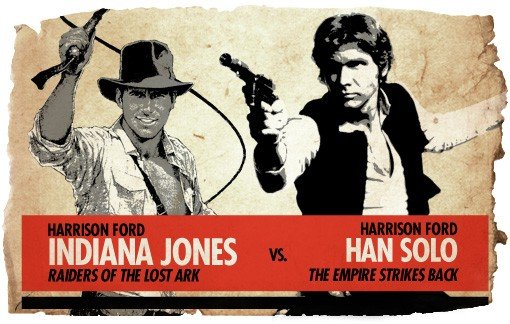 It’s a battle that has raged in schoolyards since the early 1980s — which Ford icon would beat which Ford icon? They both show up with backup, and have a good laugh when they realize they both brought along a brassy woman and a hirsute, unintelligible foreign sidekick. Knowing Solo doesn’t buy into “hokey religions,” Indy ignores his collection of holy artifacts and instead comes out brandishing a crystal alien skull. It’s a brilliant maneuver, as Solo is immediately sucked into an endless and endlessly disappointing plot hole, never to be seen again.
WINNER: INDIANA JONES 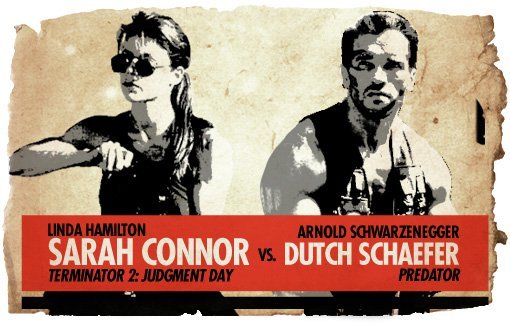 This one is over before it begins, as Sarah immediately shrinks back in terror when she sees Dutch and what she’s certain is a red glint in his eye. He’s confused by her lunatic ranting (“What unborn child? What alternate future?”), and so he simply sits back, lights a stogie, and let’s the warrior mom tire herself out with her robot apocalypse nonsense. Taking full advantage of an exhausted and disoriented Connor, Dutch  — now inexplicably shirtless and covered in mud — springs his most ingenious trap yet. Fashioning a perfect replica of Edward Furlong out of twigs and moss, Dutch lures Connor into a pit filled with scorpions, pythons, and an easily excitable Jesse Ventura. Connor will never ghost him, or indeed anyone, again.
WINNER: DUTCH SCHAEFER