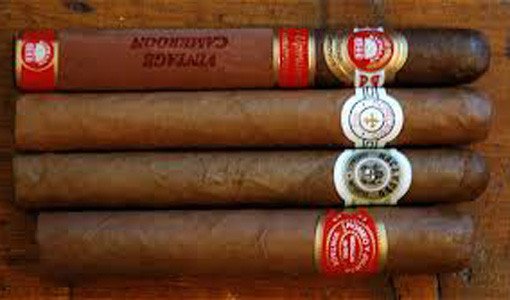 5. You Can Pair Them With Booze
If you’re like most casual smokers, you’re not lighting up while dead sober. (Sorry liver, that’s just the way it is.) A cigar is meant for relaxing. So is booze. It’s a match made in heaven, really.

Try to balance the body of the cigar with whatever you’re pairing it with. Generally speaking, a milder cigar pairs well with red wine or beer. If you’re smoking a moderately flavored cigar, try matching it with an Irish whisky, bourbon, or port. And if you’re smoking something that would tear a normal man to shreds (#stud), let it tango with a burly single-malt Scotch. Stay away from vodka and gin, though — in pretty much all circumstances, they’ll be totally overpowered by the smoke.

6. Cuban Cigars Might Be Overhyped
Everybody knows that Cuban cigars are the best, right? Well, maybe. They’re good, sure. But lots of aficionados agree that other countries — notably the Dominican Republic — produce cigars of equal quality. The thing is, Cubans have that whole forbidden fruit thing going for them. And that gives them a certain cache.

Cuban cigars have been banned in the U.S. since JFK imposed a trade embargo on the country in 1962. The president, who was a cigar lover himself, allegedly tried to exempt cigars from the embargo but was persuaded otherwise by the U.S. cigar industry. No worries for Kennedy though, on the eve of the embargo he had an order for 1,200 H. Upmann petit coronas placed on his behalf, proving once and for all that it’s good to be king.