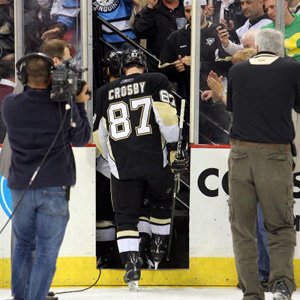 Picking on the NHL is easy. Hockey is, after all, Canadian.

But it’s also an amazing spectator sport (and the subject of one of the greatest guy movies of all time). Not only do fights still regularly occur, but all of the players are flying around on razor blades. And the vast majority of NHL teams are actually in the U.S., not Canada.

Meanwhile, NBA basketball has been hard to get excited about lately. The regular season is all but meaningless. Only a few teams having any shot at making the Finals. And during the offseason, Lebron morphed from King James to drama queen.

For these reasons and more, we’re convinced the NHL is going to kick the NBA’s ass this season.