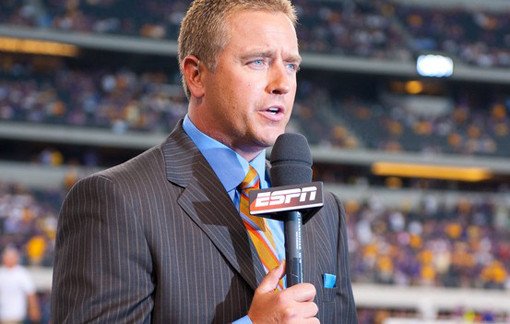 Kirk Herbstreit has been in the thick of the college football jungle for nearly 20 years as the host of ESPN’s College GameDay. This season, he’s ready to embrace the measured anarchy of a playoff system, hit the road with his GameDay buddies, and help you win tickets and $100,000. Read on to find out more …

Also: How To Not Fresh (Read: Not Like A Football Player’s Jock Strap)

1. Let’s say I’m a college football n00b. What storylines, players and teams can I bring up to make it sound like I know what I’m talking about?
The biggest story heading into the season is Jameis Winston and Florida State. They’re the defending champions, and he won the Heisman as a freshman. People are anxious to see him play. Can he have a year like he did last year? Can FSU win the back-to-back championship? At Ohio State, with Urban Meyer heading into his third year, a lot of people feel the Buckeyes have an immense level of talent and a chance to compete at a very high level.

Then they lost their quarterback Braxton Miller for the year, which was devastating, so to see if they can overcome the adversity will be interesting. It’s kind of the year of the quarterback, too, in the Pac 12. Virtually every school out there is returning a guy that started last year. High profile, big name guys, like Marcus Marriota at Oregon, or Brett Hundley at UCLA. Those are guys who will be drafted early next may.

2. So, now we have a playoff system in college football. For us dummies, please explain how that works.
The biggest thing to understand is that there are six major bowls at the end of the season and, every year, two will rotate in to become the semi finals. This year, it’s the Rose and Sugar Bowls. A committee – a thirteen person panel – ultimately decides that final four, and the remaining teams that will compete in the other bowl games.

3. How will this change the game moving forward?
The biggest change is that there are no more computers. And that’s really exciting for a lot of people. For the last fifteen years, people have been so frustrated with the BCS. Many times, after the bowls had been played, and a champion was crowned, a lot of people thought, “Oh, wouldn’t it have been great if this team played this team in the title game, instead of what actually happened?” The hope with the playoff system is to eliminate that, by giving the top four teams equal consideration and getting some great matchups.