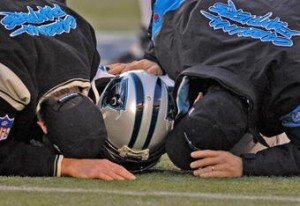 WHO: Ryan Sutter
TIME AS AN ACTIVE NFL PLAYER: 1 play
It was sort of like the movie Rudy: An average guy overcomes the odds, earns a spot on the team and the respect of his peers, and gets carried off the field. Except…well, the ending was a little different.

Instead of teammates, it was the Carolina Panthers’ athletic trainers who were carrying him off the field. In 1998, Sutter was a mainstay on Carolina’s practice team until he got the nod to suit up against the Jets in late November. During the opening kickoff, he sustained a shoulder injury that put him out of commission for the season. He was cut by the Panthers and would never play in an NFL game again. It certainly won’t go down as one of the manliest efforts in sports history, but things still turned out okay for him — in 2003 he was the dude chosen on The Bachelorette.