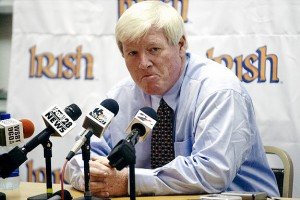 WHO: George O’Leary
LIFE SPAN AS NOTRE DAME HEAD COACH: 5 days
He called it his dream job. NCAA football coach George O’Leary wanted to become the head coach of the Fighting Irish so bad he was apparently willing to do almost anything to get it. Like lie on his resume.

O’Leary said he was a three-time letter-winner at the University of New Hampshire at offensive lineman and fullback. Thing is, O’Leary went to UNH for just two years and never even made it into a game. He also claimed to have a master’s degree from New York University, except he never graduated.

On December 14, 2001, five days after being named head coach, the University of Notre Dame announced that O’Leary had resigned after admitting to falsifying his credentials. It was a colossal embarrassment to the school and O’Leary, but he bounced back: in 2002 he was hired as defensive coordinator and D-line coach for the Minnesota Vikings, and in 2004 he was awarded the head coaching position at the University of Central Florida. But only after CareerBuilder.com showed him how to update his resume.