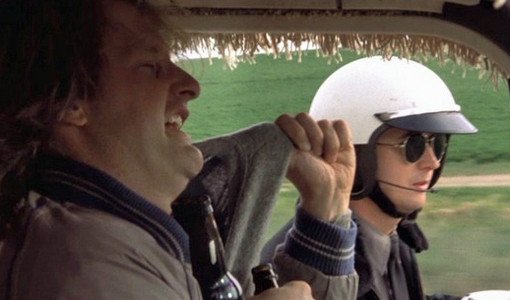 Whether you were overexcited because your favorite ABBA song came on the radio, or you were out to show some jerk that your station wagon can get it done, you got popped for speeding. That doesn’t mean you’re going to be arrested and hauled off to jail, but if you get issued a speeding ticket, it’s going to cost you a lot of money. What can you do to get out of the speeding ticket? There are no full-proof methods, but according to our friend, Officer Jamie — it’s not his real name, but he really is a 20-year veteran of the New York State Police — you’ve got a shot if you follow his seven pieces of advice.

#1. PUT THE COP AT EASE
Last month, an Indiana police officer was shot multiple times during what initially appeared to be a “routine” traffic stop. We bring that up because even though you’re not a demented sociopath (well, except for you, Randy) the cop doesn’t know that. So if you see the flashers on behind you, pull off into a well-lit and open area, turn off the car, turn on the interior lights if it’s nighttime, keep your hands on the wheel, and silently pray to any and all gods you can think of that you’re going to get out of the speeding ticket. Oh, and don’t go rooting around the glove compartment for your proof of insurance until after you’re asked for it.

#2. DON’T BE A JERK
Wait until you’re asked to provide information and documentation — and, needless to say, provide it — before politely asking if you can explain your side of things. If you act like a jerk, expect no favors. In addition, asking, “’Why did you stop me?” is like calling the officer a liar. You weren’t picked at random, so implying there was no reason to stop you questions the officer’s integrity. “To me, that’s a dick thing to do,” Officer Jamie says. He then related this exchange he once had with a perp:

Most Popular and Reliable Payment Options at Online Casinos

Converting BTC to USDT: How to Protect Your Crypto Investments

How Guys Mess Up Their Personal Finances