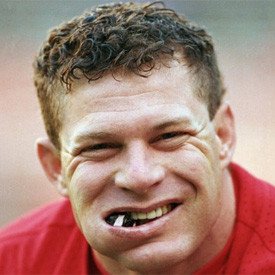 
In 2009, the former Mets and Phillies scrapper, who’d become a successful businessman in retirement, was supposedly worth an estimated $58 million. And then he wasn’t. Dykstra was accused of credit card fraud, bouncing checks to escorts, and trying to lease high-end vehicles by providing fraudulent financial info (among a laundry list of other things). In April 2011, Dykstra was arrested in Los Angeles and charged with five counts of attempted grand theft auto, eight counts of filing false financial statements, four counts of identity theft, three counts of grand theft auto, and three counts of possession of a controlled substance. Originally looking at 12 years in prison, Dykstra struck a deal with prosecutors that would drop the drug charges once he completed a drugs and alcohol abuse program. When that happens, we’ll know how much time he has to serve.