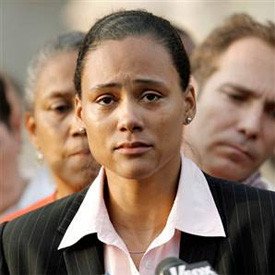 MARION JONES
Jones won five medals as a sprinter during the 2000 Summer Olympics in Sydney and signed multimillion-dollar endorsement deals shortly after; seven years later she had been stripped of her medals after being caught lying under oath to authorities about steroid use during the BALCO investigation that outed Barry Bonds, Jason Giambi, and Bill Romanowski. (She even served prison time.) At one point things got so bad that Jones reportedly had only $2,000 left in her bank account. Jones played on the WNBA’s Tulsa Shock during the 2010 season, reportedly earning the league minimum of $35,000; she was cut last year.